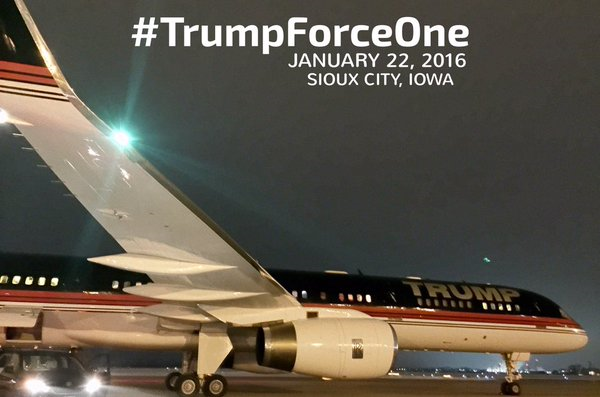 Donald J. Trump is not politically correct- he’s bold, fresh, and alpha tough! His finger is on the pulse of America’s heart that has been beating and yearning for a leader like Trump, and now that America has found him – their heart is beating like a drum roll and quickly turning into a wild version of Ron Wilson’s “wipe out”!
https://www.youtube.com/watch?v=Clr53fWVbTM
It happens wherever Trump goes and today, Trump Force One has landed in Sioux Center, IA! The place is packed (as usual) with overflow rooms and hundreds still in line hoping they get in before the Fire Marshall says – sorry guys we are full.
The Trump event held at BJ Haan Auditorium at Dordt College is once again being called a record breaking crowd for the facility! I think it is way past time that those on a mission to try and belittle Trump’s support and his record breaking crowds, just knock it off and accept the fact that AMERICA LOVES TRUMP!
On the other hand, if they want to be helpful to their darling candidate of choice, I suggest they can help by attending their favorite’s town hall rally. That way their political darling might have 10 instead of 9 in attendance. Or it could make the difference between 39 and 40! Which brings me to the bigger issue,  why do campaigns and pundits skew the polls? It is blatantly obvious that  American’s everywhere are excited about their candidate Trump. When other candidates are canceling because it’s too cold, Trump supporters have been seen getting in line at 4:30 in the morning for an evening event in zero degree weather!
Say what you will Cruz bots and pundits….the crowds and the eyes do not lie.
TRUMP WILL MAKE AMERICA GREAT AGAIN!   VOTE BABY VOTE! TRUMP IS IN THE BUILDING!
Dianne Marshall