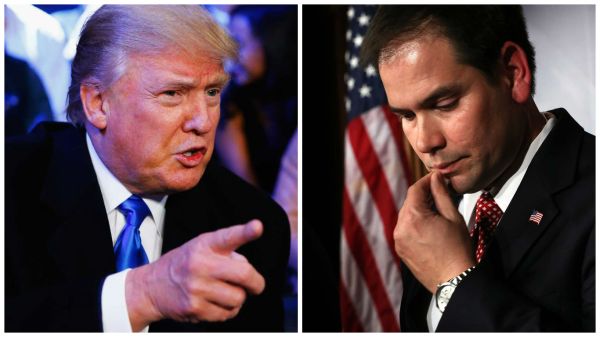 Rubio painted a grim picture of American students touting that America has a shortage of tech workers and indicating we just don’t have the smartest in the field. This is the rhetoric Rubio has used to justify his support  for the H1-B expansion bill.  He has ignored the fact that the brightest in class graduating with high  honors in science, technology, engineering, and math are unable to get jobs in their desired field.  Rubio also knows full well that the H1-B bill keeps American Graduates out of the market for tech jobs while placing illegals on the pay rolls.  He simply sold out to American workers in support of illegal favoritism and lower wages for corporate donors.

Trump fired back at little Marco, “Rubio is dead wrong. America produces the best and brightest in the world. It’s time to stand up for our own students — many of whom are racked with terrible, terrible debt and facing a disastrous job market!” Trump was outraged at the actions of Rubio and went on to correct his lies, “We are graduating two times more students in science, technology, engineering, and math than find jobs in those fields every year. We have a surplus of talented Americans and we need them to get jobs first!”

Trump vowed that when president he will not issue any H-1B Visas to companies that replace American workers and stated that his Department of Justice will pursue action against the companies that do this.

Trump did not hold back against Rubio and his bad decisions to sell out Americans in need of work.

“I am calling TODAY on Disney to hire back every one of the workers they replaced, and I am calling on Rubio to immediately rescind his sponsorship of the I-Squared bill and apologize to every Floridian for endorsing it,” Trump said.

“I am further calling on Rubio to return the money he has received from Silicon Valley CEOs and to donate the money to a charity helping unemployed Americans whose jobs Rubio has helped to destroy!”

Well Rubio isn’t budging and he really doesn’t seem to care about American workers.  His agenda is to kiss his political donors and gang of  8 all American citizens in the process.  He is unfit to be in office and Florida should recall him before he does more damage in the Senate.