Trolls are out in record numbers to cast their nets of doubt.  THE NEW TREND FOR TROLLS IS “DO THE DONALD”……HE EXPOSES THEM THEN DELETES THEM!
If you are a Trump supporter and have friended Robert Brown…he is not a Trump supporter he has infiltrated the Trump groups. I heard from a few people that he was a troll and to remove him….went to see if he was a friend on my list and yes he was….I also found this.  Thank you Dolores…you said you wanted to alert others….so….they are getting alerted.  I noticed 70 of my friends are his friends, therefore I am alerting my real friends.
Dianne 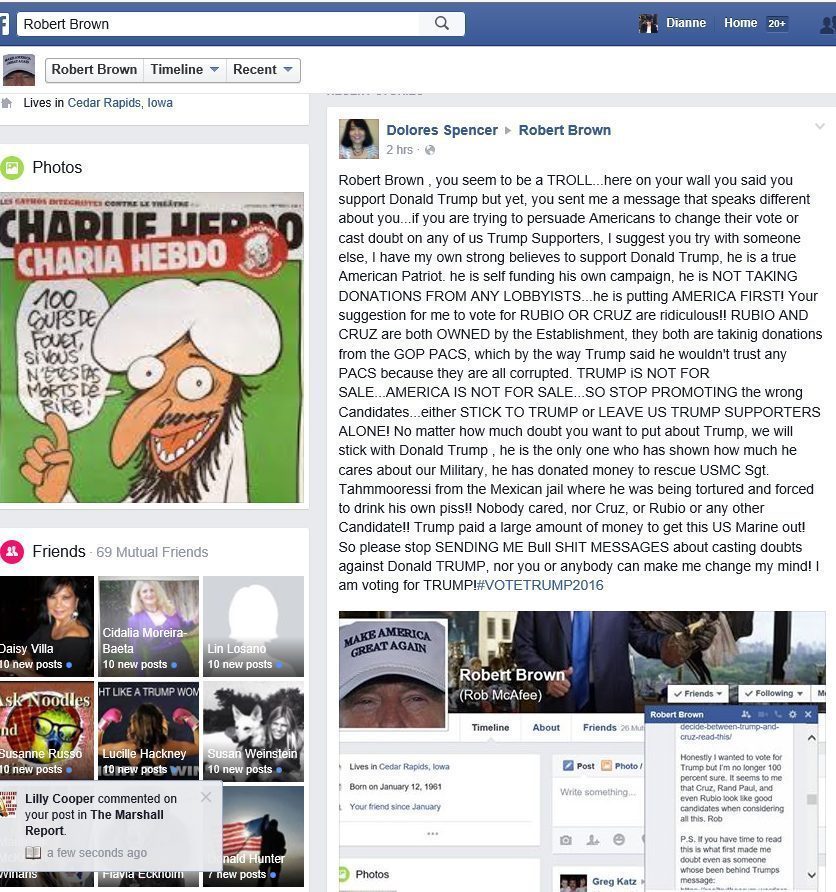 Here is the post from a group that another person was warning about Robert.

ROBERT BROWN IS A CRUZ TROLL. He was in my FRIENDS list. This is what he just wrote me. He is doing it to everyone. UNFRIEND or BLOCK HIM.
Hi Joe,
If you’re supporting Trump then I have a few questions for you. Like other people I have been enthusiastically riding the Trump train for months now. But lately people have been spamming all sorts of things at me and there are a few that have seeded my doubts about Trump that I want to ask your reaction if you don’t mind.
…
First, Trump tried to use eminent domain to take an old woman’s home to build a limousine parking lot for his casino. I saw the video, she said he has no heart, and it makes Trump seem like a downright bully who does not give a hoot about the little guy when it gets in his way.
Second, I’ve seen clips where Trump criticized Romney for being too tough on deporting illegals and said he was convinced by the activists to support a path to citizenship. Trump’s deportation plan has the illegals get deported, then the “good ones” can come right back. But just like with the Muslims, how do we determine who are the “good ones”? https://www.youtube.com/watch?v=rcUCLwWCihE
Third, there’s recent reports saying that the establishment has started to support Trump, that the lobbyists would rather have Trump than Cruz because Trump will make deals to include the special interests while Cruz will not. After all if Trump is putting his money away in a blind trust he won’t be able to use his wealth to remain above the special interest donors so they kind of have a point. https://theresurgent.com/cant-decide-between-trump-and-cruz…/
Honestly I wanted to vote for Trump but I’m no longer 100 percent sure. It seems to me that Cruz, Rand Paul, and even Rubio look like good candidates when considering all this. Rob
P.S. If you have time to read this is what first made me doubt even as someone whose been behind Trumps message: https://realtruthserum.wordpress.com/…/what-changed-my-min…/
The Trump Tapes: Vol. 1