One man who shouts the truth in a loud tone has broken all campaign records!  In Biloxi Mississippi Trump  makes history by drawing a never before record crowd!  It was reported that close to 30 thousand were in attendance!  How did he do this?  How is he doing this everywhere he goes? 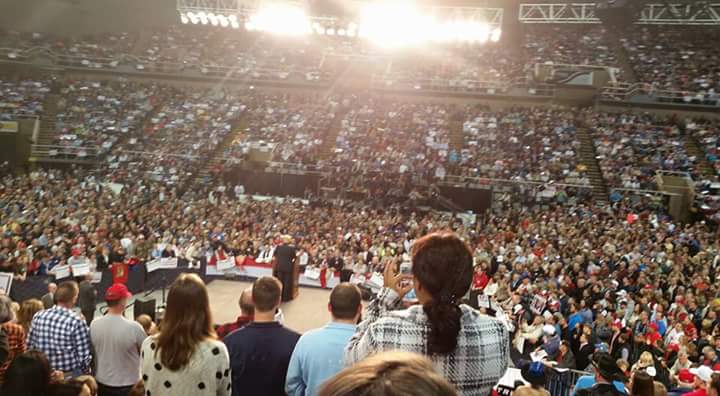 The magic of Trump is simply the people.  They love him for who he is and what he is all about. He is against the same corruption the people are against.  He is tired of watching America falling apart, the same as the people are sick and tired of watching it fall!  He wants to restore America and the people have rallied to help him restore her.  What makes Trump unique is that the people are so fired up they have come out on their own to declare him and promote him.  Trump’s campaign is every where, for it goes home with everyone who is voting for him and they let everyone know!  Why?  Because they want their America back!
A great example of this is Diamond and Silk.  These women have motivated the masses and became an overnight internet sensation – simply for believing in what Trump said he would do. They wanted the same things fixed that Trump said he was going to fix. They started stumping for the Trump the day he announced he was running and have defended him from every media attack ever since.  They said what others wanted to say and they went viral.  Why? In addition to the fact that this duo is darn good at stumping for the Trump, the main drive to their success is the fact that this is an election  year of truth.  Lies don’t and won’t cut it on the 2016 campaign trail.  The majority of Americans know that this is our last chance to make a difference.  The corruption is so deep, there will never be another chance to make America great again.

Another man, an evangelical pastor, and renown artist, Julian Raven, was touched by watching Trump.  He was moved by Donald’s ideas and his ability to speak directly to the people.  His boldness and his manner.   Julian was drawn to the man and his tone, his attitude, and that edge that comes across in his photo.  Trump did not play the game of political correctness.  He was coming out saying bold things that took guts. Two words came to Julian’s mind as he pondered over the man.  Those words were “UNAFRAID AND UNASHAMED”.  Julian felt in his heart he must compose a painting for the man.  Please watch the video below and listen to Julian Raven tell his story.

Julian completed his masterpiece of Trump and is taking the 7 foot by 15 foot painting “Unafraid and Unashamed” on a national tour for Trump in Iowa for the month of January.  His message is “Could God Be Choosing Donald Trump To Be President Of The United States of America?”
https://www.youtube.com/watch?v=q_hajEu7-Dg
You can follow Julian Raven’s updates while in Iowa on his Facebook page “Unafraid and Unashamed”.  This man was spiritually called to paint the Donald.  He recently finished, and now he is touring Iowa at just the right time.  The Lord works in mysterious ways.  Imagine the odds of an evangelical preacher who happens to be a renown artist, devoting his own time on his own dime to paint such a master piece and now taking his work and his message from city to city across the state of Iowa to tell the story that inspired his obsession to paint “UNAFRAID AND UNASHAMED”?  To  me, it has the Lord’s fingerprints all over it.
” The clock is ticking, my heart is pounding, the pressure is building, the packing list increasing, the excitement throbs in waves in between the pressure and the work of preparation….I love the spirit of adventure!
January the 1st in the afternoon is my departure from the Elmira City Hall after we witness Dan Mandell become the new Mayor of The City Of Elmira.
Then it is 1000 mile drive to Des Moines, IOWA.
If you want to follow the adventure please LIKE my page:
https://www….facebook.com/unafraidandunashamed
I will post a few updates on this page, but the daily reports will be on the ‘UnafraidandUnashamed’ page. You can also follow on twitter/@julianmraven “
It is the people who have felt a pulling in their heart to get up and do what ever they can do to help the man who has stepped out to serve the people and the nation.  This is what makes up the phenomenon called THE TRUMP PRESIDENTIAL CAMPAIGN.  Trump did not know  Julian, nor did he know Diamond and Silk.  He never hired them to do the things they  did. They stepped out boldly on their own. This is not something another candidate can mimic, no matter how much they try, for the calling is from within.  It is not a promise from without.  It is like a trumpet has sounded and those that hear it cannot ignore it.  They must come forth and do something. They do this independently and with great passion.  If you have ever had  a heart felt calling and can describe it, then you have a good base to begin to understand the phenomenon called Trump supporters.  It is a love of heart, a purpose with a passion to help like you never helped before.  There is no campaign money doled out for these people and their service, for this is a mission of the heart for God, family and country.  I know how it works,  for that is why I write.
Dianne Marshall