Microsoft announced hours before the count was even in that Hillary was the winner!  Why are we even going through these antics if the election is already stolen and no one in power is doing anything to stop it?  I swear I am Alice and have landed in wonderland. The same wonderland that has funny looking characters rushing about acting like everything’s normal and I am the one that needs to learn how to act?
BEFORE USEING IT’S AP AND OTHER EQUIPMENT FOR FORECASTING – PSYCHIC MICROSOFT MACHINE FORCASTS HILLARY AS THE WINNER! OTHERS WHO WERE CONFUSED JUST WENT AHEAD AND VOTED FOR HILLARY…  and so that was the mindset they said that won the race  against Bernie ….not to mention 90 precincts were never counted…then there was also that coin toss?
The entire smoke and mirrors act is being performed right smack in the middle of the light of day and no one is even hiding how they do their tricks!
I GUESS THE PARTY’S OVER BECAUSE MICROSOFT ALREADY ANNOUNCED THE FAT WOMAN SANG, EVEN THOUGH SHE HASN’T EVEN ENTERED THE BUILDING!
The question is – will we buy it?  Or hire another singer? 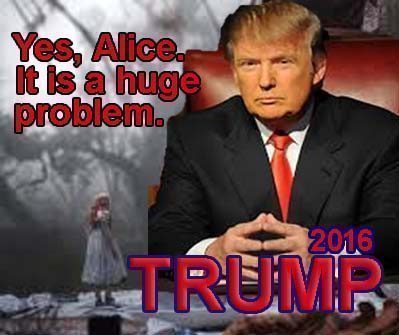