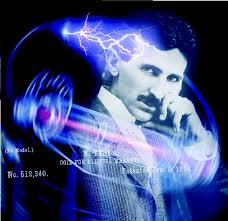 Tesla knew the moon did not orbit the earth.  Rather it rotated via an axis passing through the center of the earth.  He was often met with scoffing and ridicule at his truth, but, he was a master at proving his points with facts and results that could not be disputed.  The tycoons who made money off of controlling industry were threatened by his knowledge, especially ideas that would outdate their money trains.  The tycoons and government wanted his patents, but not Tesla’s ideas of use for them.  One such idea was to supply free electricity to the world.  He had developed the means to have the world light up at pennies.  Kind of like free Wi-Fi. He understood the earth and the natural laws that governed it.
“In astronomical treatisies usually the argument is advanced that “if the lunar globe did not turn upon its axis it would expose all parts to terrestrial view. As only a little over one-half is visible it must rotate.” But this inference is erroneous, for it only admits of one alternative. There are an infinite number of axis besides its own in each of which the moon might turn and still exhibit the same peculiarity.” Tesla
“I have stated in my article that the moon rotates about an axis passing thru the center of the earth, which is not strictly true, but it does not vitiate the conclusions I have drawn. It is well known, of course, that the two bodies revolve around a common center of gravity, which is at a distance of a little over 2,899 miles from the earth’s center.”
Read – Tesla’s original article

One of Tesla’s most controversial concepts was his stance that the earth was a realm and not a planet.  How it was a divine creation that was intelligently designed. A magnificent machine of sorts, powered by electromagnetism and propagated by aether.  And Tesla knew how to make it sing.
His idea that it was a giant domed battery brought many skeptics, yet he showed them all how it operated. The elegant simplicity of the electromagnetic dome did not require any more understanding than a few basic principles and an open mind. He explained it and proved it by harnessing the energy from it. He knew that although humans, animals, birds and plants need fresh water, the massive oceans of salt water were not there by accident.
Salt-water has everything to do with powering the earth and it’s biosphere.  It just so happens that salt-water makes an effective electrolytic solution to conduct electricity and move electrons from the anode (+) to the cathode (-).  In the case of the earth, the Artic Circle is the anode and the Antarctic ice shelf is the cathode at the earth’s surrounding base. 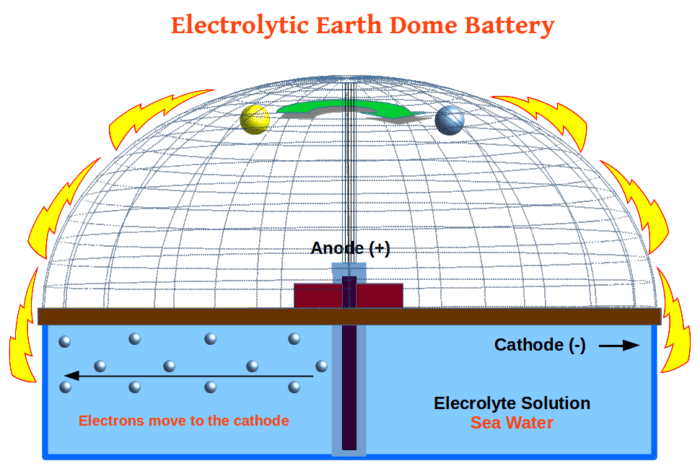 The only other thing needed are electrolytic metals and an external power source. The metals can be Zinc, Magnesium, Copper, Nickel, Gold, Iron, Brass, and others in various amounts and percentages.  The external electrical charge is the earths Schumann Resonance which is 7.83 Mhz. This provides the power to create a chemical reaction whereby electrons from Zinc for example, will peel away and move to copper.  This process is called Oxidation and Reduction.
The following rules hold true for both electrolytic and galvanic/voltaic cells.
1.Anode is always the place where oxidation happens.
2.Cathode is always the place where reduction happens.
3.Anode shoots out electrons, Cathode takes in electrons.
4.Ions = electrolyte.
5.Electrolytes conduct electricity by the motion of ions.
6.Without electrolytes, there won’t be a circuit because electricity won’t be able to travel.
It’s this chemical reaction that creates electromagnetism, the Aether and the electromagentic dome we call home. And a method to light up the world for free!
Charles Augustine De-Coulomb, J.J. Thomson and the great Nikola Tesla were onto this fact and were stopped by the powers that be. See original article – 1900’s


Tesla knew the earth was stationary, and he knew we had a firmament that was fixed. In other words he knew it had a dome. All the elements necessary to thrive in technology that was free for all was at humanities disposal.  Sadly, evil tyrants full of greed stepped in, took his patents and kept Tesla’s knowledge in the same safe guard as all the other knowledge of true science.  What they have given us is an occult based space program NASA, high energy prices, weather manipulation, Monsanto, transhumanism, and CERN…whatever that is intended to do?  Lord help us all.
Dianne Marshall