Facts need to be presented as the media does not present anything other than the scripts that are placed before them by their propaganda owners.  Time to play catch up on what is taking place in Syria.
Published on Oct 13, 2016

Madelyn Hoffman, Executive Director of New Jersey Peace Action.
The following is part of original video from a UN session featuring the US Peace Council who recently returned from a fact-finding mission to Syria. What they discovered when they arrived surprised the American visitors as they realized the entire depiction and narrative of Syria in the US and Europe – was completely contrived and patently false.

The powers that be all know this and have known this for some time.  Some of  “We The People”  have also known the same.  Unfortunately most have not known or remembered the details.  Now, that is not to say that for some reason Assad would have lost his mind and decided to act with volition against his own conscience.  After all, Eye Doctors, like himself, may at times have skewed vision?  But, for the most part, they seem to see clearly and keep a cool head.  Have you ever understood the skill and steady hand it takes to do eye surgery?
That being said, remember President Assad was welcomed by a people rejoicing as their president and he has had to juggle multiple religions within one nation to insure that each had freedom to worship freely.  Not an easy task, but one he committed to and successfully, until the day the western globalist plot thickened to rid him of his leadership. I stand by this as history, true history shows this to be so. 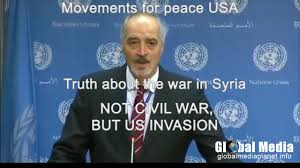 Full Press Conference at the United Nations. Against propaganda and regime change, for peace and national sovereignty. 9 December 2016, the Permanent Mission of the Syrian Arab Republic to the United Nations. Speakers: Dr. Bahman Azad, Member of the Coordinating Committee for the Hands Off Syria and Organization Secretary of US Peace Council, and Eva Bartlett, Independent Canadian Journalist.

It is hard to understand what is true and what is false…so why not listen to those who went on their own dime, without national interest, but only interest in finding out the truth.
https://www.youtube.com/watch?v=2QUKHE7rt0M
So again the question of chemical weapons…that red line.  Well….it is there…but who is crossing it?

https://www.soas.ac.uk/cisd/
This Centre for International Studies and Diplomacy Annual Lecture 2015 titled “An experience in multilateralism in the Middle East, from the chemical weapons elimination programme in Syria to UN engagement in Lebanon” was given by Sigrid Kaag on 5 June 2015.

Ms Kaag is the Under Secretary-General and UN Special Coordinator for Lebanon and previously served as the Special Coordinator of the Organization for the Prohibition of Chemical Weapons-United Nations Joint Mission to eliminate the chemical weapons programme of the Syrian Arab Republic, from October 2013 to September 2014. She brings with her a wealth of experience in political, humanitarian and development affairs alongside her diplomatic service, including in the Middle East.

Be it 2013 OR ALL THE DIGGING ALONG THE WAY – One thing is sure – it all points to unrest and terrorist activity in the middle east and funding for this war from outside sources for the poor of the desert have no means of funding this themselves.