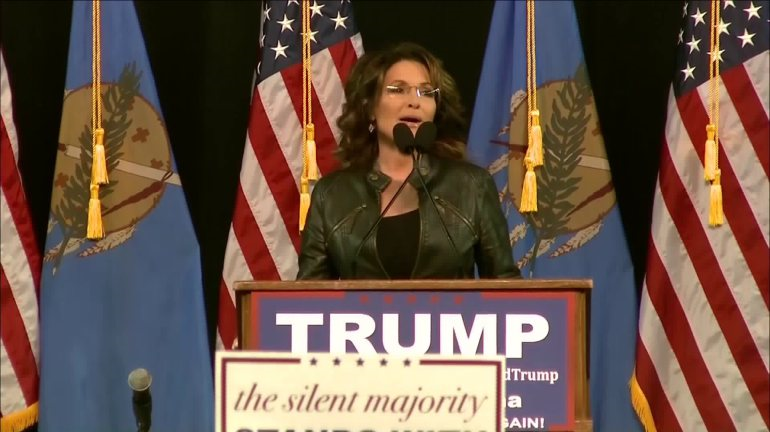 Sarah Palin hit the nail on the head in Tulsa when talking about our veterans and how the disrespect for the military from the Commander in Chief adds to the stress and toll war takes on our veterans.
Specifically pointing out how PTSD (post traumatic stress disorder) has affected her own son and how it effects so many of our young men and women. I never made the connection between what seemed to be stupid and demeaning actions against our military by Obama and a specific plan by design to create the means to complicate an already serious disorder. Sarah didn’t say what I am about to say, but, I am sure she has figured it out. It is now appearing as though creating more mental duress and provoking others to anger is a darn good way to take away a veteran’s gun rights. Think about it. The plan is “Mental Illness” of which PTSD falls under, and when diagnose with it  you can’t own a firearm. No second amendment rights for you. I never saw the big picture before. I do now.
Obama has been trying to disarm all of America and especially our veteran oath keepers for a long time now. When you add the increased abuse from making our men stand down, not allowing our service men to carry a Bible or pray in groups, then add to that the  numbers of times they are placed in harms way without the proper body armor and equipment- and at times told to use rubber bullets, while the enemy blasts at them with deadly weapons….tell me that doesn’t play a real toll. Then they come home and have liberal idiots mock them for their service to our country, and in the case of Todd, listen to others continue to slander and blaspheme his family  …….there is a breaking point.  It’s called tired of the disrespect – enough is enough.
Try calling a healthy black man with no PTSD the “N” word and watch him get angry. Keep yelling that word in his face and believe me – you will have him fighting back real fast. If you want to risk your life, taunt the angry man’s family while you’re at it. That is just a normal reaction to bully insults.
I hope that the Palin story can be used for good to help others. Especially to help stop the ignorance of those who are doing harm without conscience.
“My son, like so many others, they come back a bit different. They come back hardened,” she remarked (see video below) “They come back wondering if there is that respect for what their fellow soldiers and airmen and every other member of the military have given so sacrificially to this country, and that starts at the top,” she explained. “It’s a shame that our military personnel even have to question, have to wonder if they’re respected anymore. It starts from the top. The question, though, it comes from the top, the question, though, that comes from our own president where they have to look at him and wonder, ‘Do you know what we go through? Do you know what we’re trying to do to secure America and to secure the freedoms that have been bequeathed us?’”
“So when my own son is going through what he goes through coming back, I can certainly relate with other families who kind of feel these ramifications of some PTSD and some of the woundedness that our soldiers do return with, and it makes me realize more than ever, it is now or never for the sake of America’s finest that we’ll have that commander in chief who will respect them and honor them,” she added.

It will take every one of “We The People”, leaders like Sarah Palin, and a Commander In Chief like Donald J. Trump to stop the establishment’s war against America. We are now in the heat of an election battle for the White House. There is only one who can and will bring America together again.  That one is Trump.  At the end of the day,  when the election is won and the smoke is cleared, all the people that have been broken one piece at a time by a corrupt and deceitful establishment will come together and begin to heal.
Elect a leader who will make America Great Again, Strong Again, and United Again – ELECT DONALD JOHN TRUMP!
Dianne Marshall