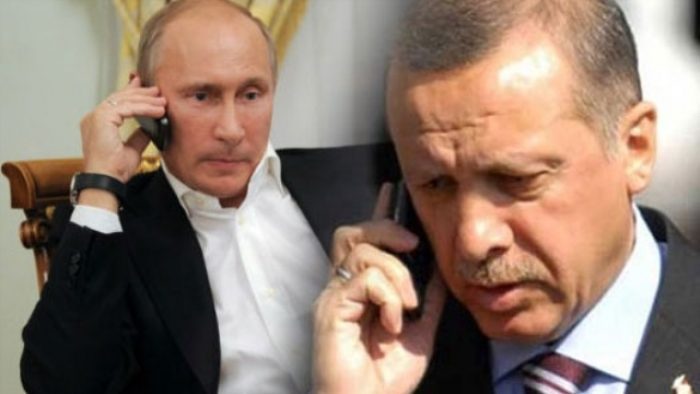 On the world stage, Russia’s Putin and Turkey’s Erdogan are at odds over commercial ships.  Russia has detained eight commercial ships flying Turkish flags in the Black Sea since the downing of he Russian plane and killing of a Russian pilot, and  Turkey in retaliation has detained a total of 27 Russian ships, as reported by daily Habertürk on Dec. 16.
To complicate an already strained relationship, Russian airstrikes across northern Syria have steadily shifted the epicenter of the war toward a corridor north of Aleppo, where Turkey smuggles aid and supplies to the rebel groups it supports.

As a result, Turkey’s policy of bolstering Syrian rebels — and establishing a “safe zone” for displaced Syrians that might hinder the regime’s efforts to take Aleppo — is quickly unraveling.  (see link below)
Another problem is Putin has now ignored Erdogan’s  warning not to arm the Kurds, as that would enable them to advance west across the Euphrates — Turkey’s “red line” for the YPG — and seize the rebel-held Azaz.  Earlier this month, Moscow delivered weapons to the Kurdish fighters in Afrin, while Russian planes bombed a convoy of trucks that crossed the Turkish border into Syria at Bab al-Salam.
Rebel positions north of Aleppo were struck as well, making way for a  ground offensive by the Kurdish People’s Defense Units (YPG), the PYD’s main militia.
Russia denies deliberate targeting of anyone but terrorists.
The Washington Institute’s Fabrice Balanche wrote, “As a result of the airstrikes, the terrorists have suffered considerable losses in manpower.  Whether Azaz falls to ISIS or to the Kurds ultimately makes little difference to Russia — as long as the corridor remains inaccessible to the rebels backed by Turkey.”
“With the Azaz border link closed, Russia could then help the Syrian army and its Shiite allies lock other Turkish crossing points between Bab al-Hawa and Jisr al-Shughour, effectively putting the entire province of Idlib in a net,” Balanche said.
After Turkey’s downing of a Russian warplane last month, it was reported that Russia equipped its jets flying in Syria with air-to-air missiles for self-defense and sent a state-of-the-art S-400 missile system to the Russian Hemeimeem air base near Latakia — about 30 miles south of the Turkish border.
As a result of Russia’s maneuvers, Turkey has lost its strategic advantage both on the ground and in its air space.  Turkey is left with few options to oppose Russian airstrikes without provoking a situation that would force  NATO to come to its defense.  NATO intervention would escalate the already tense Turkish/Russian crisis.
https://www.youtube.com/watch?v=lzma42b6CBs
https://www.hurriyetdailynews.com/turkey-detains-27-russian-commercial-ships-in-retaliation-92593
https://www.breitbart.com/national-security/2015/12/04/world-view-russia-and-turkey-increasingly-on-war-footing/
Dianne Marshall