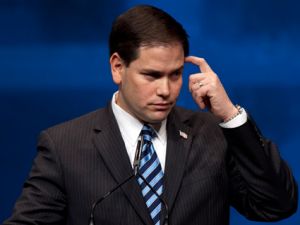 Why support a guy who blatantly has said he hates being a senator and isn’t going to run again?  What about the constituents who elected him?  Are they supposed to just have little or no representation for the next year or so?

Florida just might recall him, and who would blame them? Why shouldn’t they replace him with someone who wants to make a difference.  Just saying….it was very poor judgment on Rubio’s part to holler out his true feelings. Especially at a national debate that aired world wide.  But, since he did…what will Florida do?  So far they have asked for him to resign in the Sun Sentinel Newspaper….Rubio seems to believe he can just do whatever he wants when he wants.  He has definately slapped his constituents in the face publicly.  Will he last?

Marco seems to think he can go up against the Titan named Trump.  Good luck Marco. You have no clue as to the giant you have been throwing rocks at.  Does anyone recall all the cheap shots Rubio has been pulling against trump calling him un-presidential, demanding that he step down, calling his campaign a freak show, etc. What a mess.  Rubio would be better off just drinking his water and sitting down.  Just saying.

Rubio also judges Putin and totally gets it wrong.