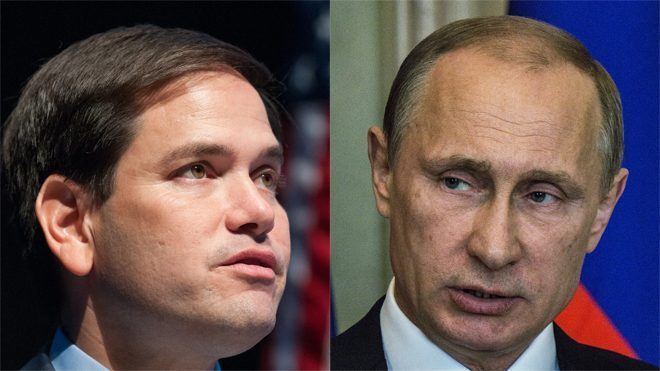 Listening to Rubio’s war drum is painful to the ears.  More painful is hearing him call Putin a gangster again. The last time he did Putin’s response to Charlie Rose was, “How can I be a gangster being a former KGB agent? It doesn’t conform with reality.”  I guess when you are green around the ears and can’t control your finances, it’s easy to let the puppet masters  (who promise you everything) script your every word which reeks of new world global governance for the 21st century and rhetoric that doesn’t conform with reality.

Rubio shows his immaturity and total ignorance to foreign policy on nights like tonight when he stands on a debate stage and shouts ridiculous rhetoric that makes no real sense to those who really know what is going on in the middle east, let alone his shouting he would declare no fly zones.  No fly zones are an act of war.  Rand Paul half way pointed this out.

Allow me to point out the rest of the problem with Rubio’s declaration.   What if Putin went to the Kremlin and demanded a no fly zone over the USA?  That would mean the friendly skys and all those frequent flyer miles will have to wait until Putin decides we can have our sovereign right to fly back.  Until then, Russia would have the right to shoot down our planes.  Are you seeing the big picture here?  Do the people even understand what no fly zone means?  It means they are declaring war on our nation.  Russia would need boots on the ground (they could easily come across our border), their naval ships would surround us on the west and the east coasts – complete with all the latest fighter jets and missile launchers.  They would shoot down any military or other aircraft in the sky over our sea to shining sea no fly zone. Hawaii would be surrounded and they would just fire at Alaska from Putin’s house.  We will shoot back and we will be at war.  Has anyone thought of that?  Or have we just been too safe for too long?

That being said, what right does America or any nation have to demand such action on a sovereign nation? It has no right to do so.  To declare that is an act of war.  This is what Obama did to Libya and Gaddafi was unable to fight off Islamist invaders before they invaded.  If he put up a military plane it was shot down.  America is responsible for the toppled Libya.  And now it is a mess.  So Rubio gets applause along with Carly and a few other idiots for shouting that an act of war is needed?  That is what “No Fly Zone” means.

Rubio is a boy who would lead us into chaos of untold proportions.  A boy that still doesn’t understand the world any better than he understands finances, no wonder he still sees Putin, as a gangster and not as a real leader who is protecting his own nations interest along with that of his neighbors and allies.  It is also disturbing to watch the boy support other disastrous things to cut America off at the knees…like amnesty dream acts and TTP acts.

I swear if I hear him talk about his struggles to raise a family one more time, as something Hillary can’t use on him, I will scream.  All Hillary will have to do is point out that the average family has never seen $400,000 in one year as he has earned, let alone accumulated $4.5 million in the last 15 years as he has done, so where did it all go?  Rubio what on earth are you talking about?  How much do your four children eat?  If you can’t manage a household on that kind of upper 5 percent income, you don’t need to even think of bringing down the national debt nor budgeting the US. finances. She will eat the blaming idiot alive on the one point he says she can’t use on him.  Then she’ll go in for the rest of the kill.

Aren’t you all getting tired of the lies and hype?

Aren’t you tired of being told we are fighting ISIS, by the same regime creating the entire mess? The regime that is training, financing, supplying and orchestrating gun running, and terrorism on your tax dollar and lying about what they are doing and have done?  Why do you think they had to lie to the public?  It is because they knew the public would never approve of regime toppling and mass murder to any segment of humanity, especially sovereign nations.

So as more is revealed as to the true nature of what has been done, it is important to have a commander in chief who can act soundly and make the right decisions to end the war strategies that have created world chaos.  The last thing the world needs are more puppets who work the bidding of great merchants of the earth.

I am sure someone will call me a liar and tell me Rubio is bla, bla, bla.  My answer in advance is the famous one from Gone With The Wind….”Frankly my dear I don’t give a d>>>!”