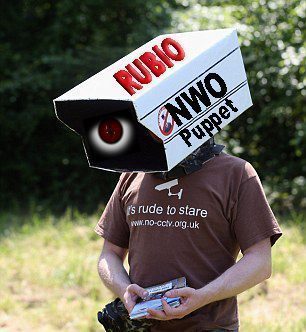 Marco Rubio really must believe Americans are idiots.  For sure, this is one interview he should have spoken in Spanish.  It would have left fewer repercussions.  But, like a fool he spoke it in plain English! Or should I say, like a puppet?

In an appearance Tuesday on Fox News, Little Marco again questioned Mr. Trump’s readiness to be president.  Instead of yapping his liar mouth about Trump, he should have taken the opportunity to apologize to the nation for screwing us all over. But instead the liar said this:

“I think that the most important thing a president will ever do is provide for the national security of our country, and I think up to now, he hasn’t really answered serious questions about national security,” Mr. Rubio said. “Until he does, there should be serious concerns, not just about him but about any candidate that’s not able to speak in detail, with clarity and with seriousness, about the national security threats that we face.”

At this point, I don’t have to say another word but I will.  What idiot would not read a bill, cast a deciding vote that grants Obama total control over immigration and all other forms of trade, even to the point of allowing foreign nations to decide on issues that constitutionally lay solely within the power of congress to decide?  Only the boy traitor Marco Rubio.