RUBIO AND GANG OF EIGHT HELPED WITH BORDER CRISIS - HOW COULD THEY NOT HAVE? - The Marshall Report Skip to the content 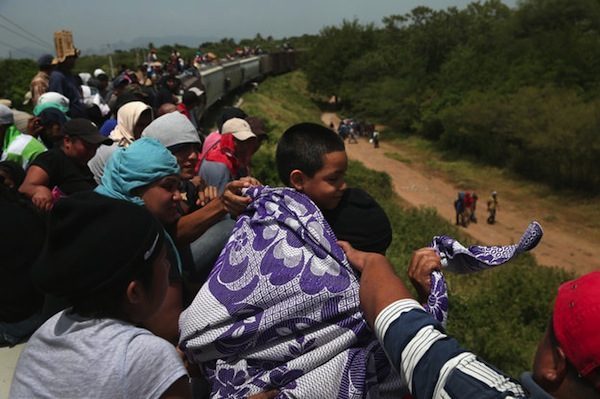 While little Marco Rubio was busy with the gang of eight coming up with their Dream Act and amnesty for all in 2013, we are supposed to believe that they knew nothing of the plans to overload America with train loads of more illegals.  If you will remember at the start of January in the year 2014 there were lots of coinciding events taking place that were urging action for congress to pass their little packages granting amnesty to all illegals.

But remember, no one was sending them here.  Oh no.  Illegals  just come on their own.

They definitely made that clear to Trump and his crazy supporters.  No one was sending any one across the border. They were simply coming across for the American dream.  Right?  Well, let’s jog a few memories here.

Does anyone know just why the federal government posted an advertisement seeking bids for a vendor contract to handle 65,000 unaccompanied ALIEN CHILDREN on January 29th of 2014?   Does anyone in the news media even care? After all, these poor children weren’t here yet, but would be needing our humanitarian efforts and support. Right?

It’s like the Obama  administration looked into their crystal ball and saw this coming and knew they would need at least  5 billion dollars of tax payer money to feed these illegal immigrant children, gang members who claim to be 17, adults, drug dealers, and who knows how many Islamic terrorists.  He should get it right? After all we are a Christian nation, right?

Diseased children and adults were being processed and dumped on the streets in border towns, others were being shipped like cargo across the nation and many were being housed on our military bases. Do you remember this?

America was told to applaud these illegal masses and ignore the fact that a border patrol agent just contacted tuberculosis, and foot and mouth disease was being reported in large numbers in towns receiving these petri dishes? This was and is not only a issue of illegal immigration, this is a very serious health issue that is systematically being spread and not at all being contained.

Think about it for a moment please. The percentage of infected immigrants is so much higher than the frequency of diseases found in those nations. Which raises the question of how, despite their illnesses, the sick and diseased had managed to travel long distances across Mexico to get to our border. This appears to reach beyond a statistical probability and into purposeful action. A BIO-weapon delivery system of sorts. Someone was waging war on the American citizens and the fingers all pointed to the White House for its’ orchestration.

Either that or the federal government had a psychic feeling something would be taking place in the near future that would involve such a mass of alien children coming across unsecured borders and had the foresight to plan for the redistribution of child BIO-weapons.

I’m shocked that DHS and ICE were “surprised” in July of 2014 by the thousands of children coming into the promised land, especially since they were taking the bids for their care in January. For those who missed the January  2014 promo, here are a few excerpts:

“… The Contractor shall provide unarmed escort staff, including management, supervision, manpower, training, certifications, licenses, drug testing, equipment, and supplies necessary to provide on-demand escort services for non-criminal/non-delinquent unaccompanied alien children ages infant to 17 years of age, seven (7) days a week, 365 days a year. Transport will be required for either category of UAC or individual juveniles, to include both male and female juveniles. There will be approximately 65,000 UAC in total: 25% local ground transport, 25% via ICE charter and 50% via commercial air.”

“… In addition, the Contractor shall have personnel who are able to communicate with juveniles in their own designated language(s).”

All I can say is – BUSTED! I have heard many people call it a “Cloward-Piven” strategy, I call it treason! I’ll take that one step further and call it premeditated treason!

This certainly isn’t designed or shall I say contracted to go away fast. The contracts are for five years! Here is an interesting clip from FedBizOpps.Gov’s site.

The Government anticipates awarding a five (5) year Fixed Price Indefinite Delivery, Indefinite Quantity (IDIQ) contract vehicle consisting of a one year base period, and four (4) option years. The Service Contract Act is applicable to this acquisition. All required clauses, provisions will be included in the solicitation and resulting contractual instrument.

The anticipated release date of the solicitation is March 3, 2014. The solicitation closing date will be thirty (30) days after release of the Request for Proposal (RFP).

Projected Set-Aside: All business sizes are welcome to participate; however, ICE is trying to determine small business interest, particularly HubZone companies. All information received in response in to this notice will be used to determine the appropriateness of any small business set-aside for this requirement.”

Your tax dollars are hard at work to bring you all the lawlessness and disease it can, and yes it can! Stay awake for this one folks, it may be coming to your town. Another little tid bit is the fact that the service area for the redistribution is throughout the Continental United States, as stated in the government job opportunity want ad.

Service Area: Throughout the Continental United States (US)

The area(s) or region(s) serviced may occur either with a phased approach over a period of several months to a full year. Alternatively, the Contractor shall perform the entire transportation function

upon full funding. For example, the following two circumstances may occur: (1) The contractor could initially provide transportation services only in the Southwest Region of the U.S. for those juveniles who are apprehended in the state of Texas; or, (2) The Contractor may be required to provide transportation services for all juveniles who are in DHS custody throughout the continental U.S. “

For those with inquiring minds, here is the contact person.

“Submit written or electronic submissions via email to Rachel.Ali@ice.dhs.gov by 1:00pm EST on Monday, February 19, 2014.”

And now we are told to do the right thing and allow 200,000 Islamist refugees into the country over the next 5 or 6 years.  This madness needs exposed and stopped or forever kiss America good bye.

SHAME ON THE MEDIA FOR CALLING TRUMP A LIAR WHEN HE STATED THAT ILLEGALS WERE BEING SENT TO THE UNITED STATES.