Putin - Done With NWO And Christian Persecution! - The Marshall Report Skip to the content 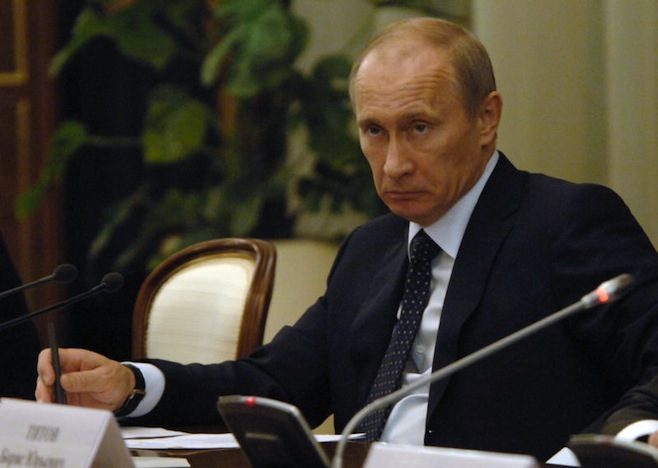 “Oh, you are asking how a person like me can destroy a diabolical plan, right?” stated Putin, “Simple: morality, practical reason, and ultimate truth.  How do you explain the fact that NWO agents will not debate me on these issues?  It is because they, like their father, have no truth in them.”
And just what father is Putin referring too?  Could it be the same one the Lord accused to be that of the Pharisees?  I would guess so, especially in view of this being Putin’s “operation Salvation” to stop the evil persecution and killing of Christians world wide.  Putin was asked by the Russian Orthodox Church to defend Christians and stop the horrendous  persecutions and killings.  He accepted the mission.  I say, thank you Vladimir Putin, especially in light of the fact that the new world order has set up refugee Trojan horses and shipping jihadists to all the nations.
As one writer put it,
“The establishment elite’s game is over.  Putin is flexing his muscle against ISIS/ISIL aggression and ridding the strongholds Obama has created in the Syrian area.  Meanwhile the western media continues to tell the people Russia is the enemy.  Yet, the western world is sponsoring the terrorism that is killing Christians in an Islamic ethnic cleansing.”
Putin has offered to discuss the so-called “moderate” rebels with Washington many times and the White House refuses to have any discussions.  It doesn’t look like Obama wants to solve the problem, and it doesn’t look like he wants to discuss his motives and or justification for “moderate” Islamists.
It is looking more and more like Putin is a big  problem, but not for a free world that desires to respect a nations sovereignty. It is a problem for those who have spent decades of preparation and planning to bring about a new world order. A world controlled by the same puppet masters that are presently controlling Washington and other nation heads.  These are the very ones that feed the MSM propaganda machine and give the orders that must be carried out or else.  Putin is weakening their strides and exposing their master plans.
This is just beginning, and Putin is not shy about his intentions. Vladimir openly stated,  “It is morally incumbent upon Russia to change this terrible status quo in the Middle-East. Prepare for operation ‘Salvation’ and with God almighty’s aid, we shall cleanse Syria from Obama’s ruthless terrorists.”
I, for one, am glad that Putin isn’t waiting for an election before he acts.  He has shown great leadership, in protecting his nation, mother Russia, and in so doing has weakened the hold of the lawlessness taking place in the middle east.  What will it take for our elected officials to stand up and take responsible action to uphold the constitution and protect the people of the United States?  Sadly they always seem to postpone until another election, which there is always one to come.  Is anyone else tired of the political games of the puppets and their puppet masters?  If so, expose them as boldly as Putin is doing.
Dianne Marshall
Read More at:  https://www.goforwardtogether.com/2015/12/06/why-is-the-whole-world-lining-up-behind-vladimir-putin/