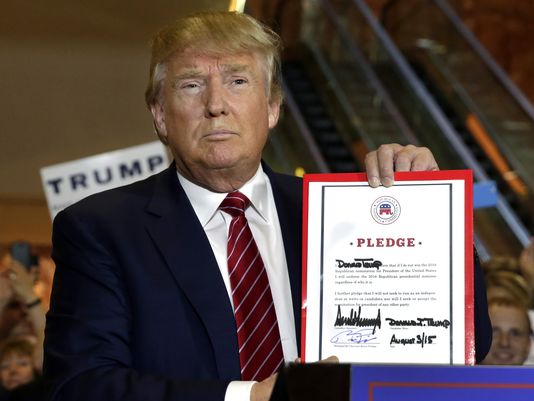 America watched as Donald J. Trump signed his loyalty pledge to the GOP.  No other candidate had to sign such a piece of paper.  Did anyone wonder why?  It’s because all the others were already bought and paid for by the establishment elite donors and Trump was the only candidate that stood alone, free to fight for Americans across the nation without a party loyalty. Yes he has been a republican since the Reagan years in the ’80’s, but he has never looked at Americans party affiliation before he looked at the man or the woman.  He has always looked at people as AMERICANS.
The Donald stood for America and vowed to make her great again, and restore the American dream.  Why was that a threat to the establishment GOP?  Could it be Trump truly was for rebuilding America and building a border wall?  Could it be he really meant it  when he proclaimed, “A nation without borders is not a nation!”?
Could it be that Trump and his stance to make America great again was in direct conflict with the establishment elite’s goal to have a borderless north America?
Is that why neoconservatives have went full throttle to shout -“Trump is not a conservative and Trump threatens the values they stand for?”  Have you ever heard any of those of the National Review come out and expose any of the establishment plans to bring about a nice new North American Union?  If not…why?
There is only one man STILL in the running that truly desires to keep America in tact and MAKE HER GREAT AGAIN!  That is the frontrunner DONALD J. TRUMP.
Now I ask everyone….do you believe the GOP has honored their part of the loyalty pledge to treat Donald J. Trump fairly?
VOTE TRUMP TO RESTORE JOBS AND BRING BACK – MADE IN AMERICA!
Dianne Marshall