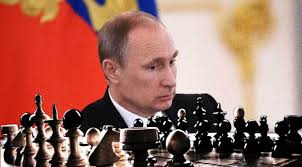 The U.S. State Department Spokesperson, Mark Toner, gave a weak answer on the downing of the Russian jet by Turkey.  It is looking more and more like Obama had intelligence prior to the downing of the Russian plane or perhaps held a position of accomplice, just as Putin has suspected.  It is having all the appearance that Barack may have told President Erdogan that he would cover his back on this and Erdogan believed him.
I’m sure this is simply the first step in moving a few pawns forward in Obama’s strategic chess moves to edge a “knight or bishop” closer to check-mating  Assad.   Putin is watching the entire board and edging toward a quick check mate on the entire sloppy moves.  I mean, let’s face it folks…if what is taking place is this obvious to me and others  – just think how ridiculously feeble these moves appear to the real chess master Vladimir?  It doesn’t take much to figure out Obama is using the powerful Muslim Brotherhood arm of Erdogan, who desires a Neo-Ottoman Empire, in an effort to have NATO pressure Putin to back away from the region, and/or slap a list of “war do’s and don’ts” on him.  A list that is not forthcoming, and even if it were, the list would be as worthless as Obama’s word.
I suspect Erdogan is about to find out that Obama covers his own behind first and expects others to make him look good.  In return, I suspect Erdogan will find a way to return the favor to Obama. There is truly no honor among thieves.
For those of us who have watched how Obama operates, this gives all the signs of big lies.  Especially when the State Department Spokesperson almost smirks a few times  So typical, but, it looks like their media garble isn’t going to work real well on a world scale.  (see video below)
The real  question is, what is Saudi Arabia planning to do.  They are the major donor in the game with money waged that Obama knows how to play this game of chess that is turning out to look like a back alley game of marbles.
Dianne Marshall