Hillary has left the DNC building and the only bounce she got was from the blue balloons.  The 99 red balloons floating in the summer DNC convention sky exposed her evil globalist plot!
https://www.youtube.com/watch?v=wirRZsAvJGQ 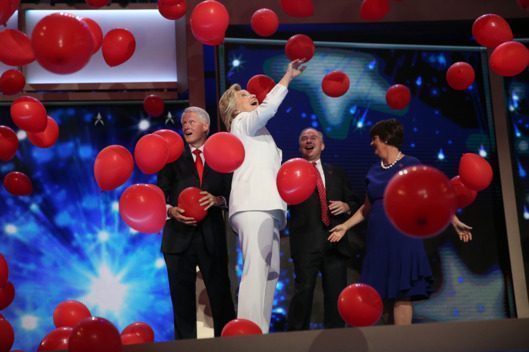 You and I in a little toy shop (Bernie voters)
Buy a bag of balloons with the money we’ve got (Bernie campaign donations)
Set them free at the break of dawn (DNC convention)
Til one by one, they were gone (given over to Hillary by Bernie)
Back at base bugs in the software (WikiLeaks)
Flash the message, something’s out there (DNC fraud exposed)
Floating in the summer sky (we see it)
99 red balloons go by (war regime on America)

Hillary made history by being the only nominee who has never gotten a bounce from a convention unless you want to count the bounce to the curb!  But then again, no one ever so blatantly stole a primary seat either.
Dianne