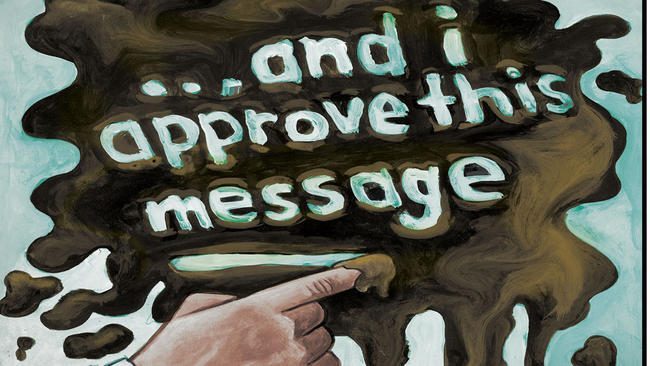 The only election in America that did not use underhanded tactics to cut down their opponent was the election of the very first President, which was the appointment of George Washington by unanimous electoral votes, no general election.  Beyond that…it was always a dirt slinging contest.  The only difference is that some threw softer mud and others threw mud with rocks.

I remember visiting the Abraham Lincoln Museum in Springfield, IL and looking at the thousands of political ads lining walls and walls.  The vile images and attacks on Lincoln and his stances were shocking.  It was an eye opener that got me looking at the history of political attack ads which many were harsh cartoons.  From the very first election to today, attack ads have been brutal and the name calling was actually worse in the 18th and 19th centuries than they are today.

The point I am making here is this.  To think that there will ever be a thing called a clean campaign just isn’t going to happen as long as one side or the other isn’t willing to forgo throwing mud.  Is a candidate supposed to win by getting slammed with mud from the other side?  No.  That candidate will look weak and the mud thrower will be believed if he keeps the opponent covered from head to toe.

Trump has called out the slingers of mud and rock and in so doing many have fallen by the wayside.  Now that the campaign is narrowing down to a dozen or so, for some reason many believe no mud should be thrown by candidates.  All the while those that refrain are slammed upside the head by the dems, the media, the GOP, and the other candidates who somehow have a free pass to sling mud pies.  So, it is what it is and why it is called politics.

Those that stay on message and manage to ward off the mud will be the winners, as long as they know how to counter back with a bigger mud pie that is.  In short, when slamming your opponent upside the head, expect a counter punch.  It would be good to remember not to throw the mud first.

It will be good for all to remember, most voters like counter punchers not those who sling first.