NATO: The US conducted airstrikes on behalf of ISIS, murdering Syrian soldiers in the light of day!  This was an act of war on Syria and presumably on Russia! In an emergency UN security meeting to discuss the matter with Russia and members of NATO, the US Ambassador to the UN, Samantha Power, had the gall to scowl and storm out of the emergency UN Security Council meeting instead of answering questions from her Russian counterpart Vitaly Churkin. 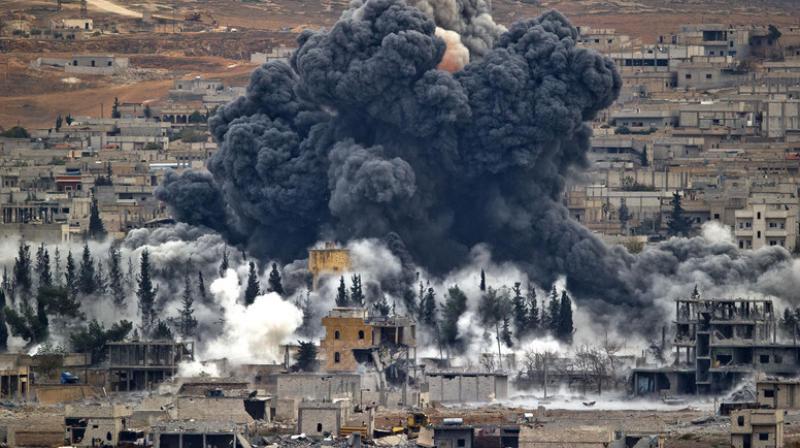 I guess she thought she was in D.C. in front of congress? Or maybe in front of the F.B.I.? Who knows where she thought she was or who for that matter?
It is obvious that the Obama regime, along with DNC campaign darlene , Hillary, have all deluded their sense of reality. All reason has been replaced with their own deranged idea of self indulged power, importance, and  self serving authority.
One thing is sure, this administration has followed in the Bush administration’s façade of failed foreign policy based on faux justice …you know the world view of, “You are either with us or against us”. Well, this world view is no longer sustainable on the world stage . 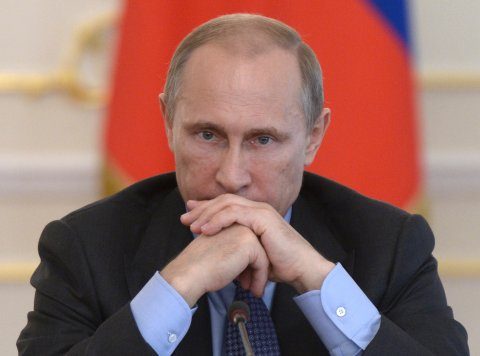 This back room western new world order contrived foreign policy allowed Bush to blast the heck out of Afganistan and Iraq. The shock and awe and massive push killed over 500 million innocent children and an untold number of women , elderly and other citizens.  The ones Hillary now says she loves, yet she still supports the same policy that will kill more innocent women and children – the ones she loves.  Any deplorable person who questions any of the madness is called Islamaphobic.
One thing is very clear. The entire war on terror house of cards has carried over into the Obama regime with the addition of the “drone wars” card that gives the holder a double whammy when also holding the Bush “do what we say or else super power card.” 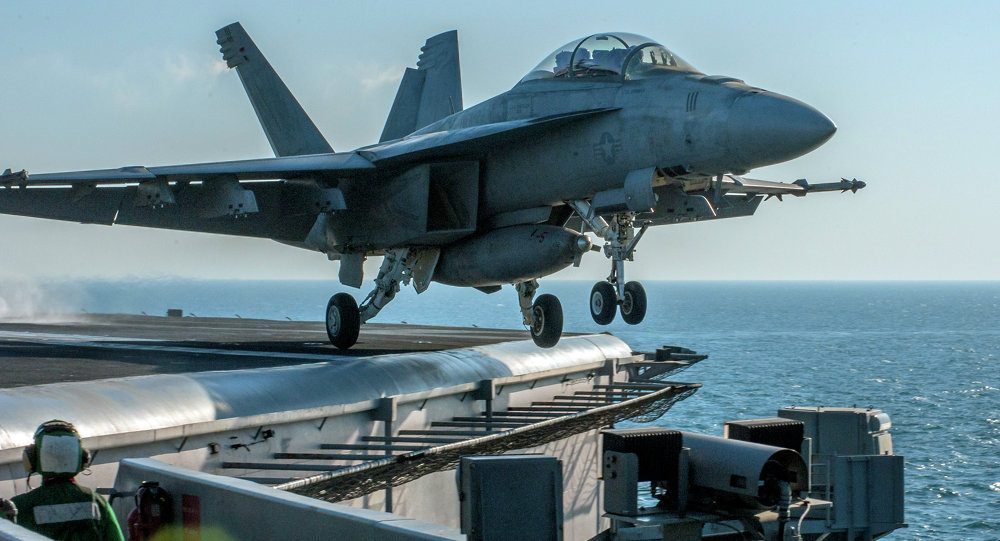 It is clear there are names for those who are ordering these mass murders of innocents and arming the enemy ISIS. ‘War monger’ is rather a soft ball phrase to use concering the events. Better fitting would be “terrorists”! But we are the good guys right? We used to be….our pontus has committed treason and sadly our government has been infiltrated.  Our congress and senate are blind and the tyrants are getting away with murder at home and abroad.
Hillary is correct about one thing….Trump doesn’t have the same failed foreign policy plans.
For more information please read the full article in the link below by Corey Schink of Scott. Here are some of the highlights:
The entire fiction that is the US’ rationale for waging endless war is falling apart, and so are the ‘masks of sanity’ worn by psychopaths like Samantha Power. The US has been caught red-handed (yet again) providing air cover for ISIS in the Middle East, while Russia, it appears, has been patiently waiting for opportunities to call them out on it. And now that they have, at the ‘highest court in the land’, and Little Ms. Sunshine just lost it. 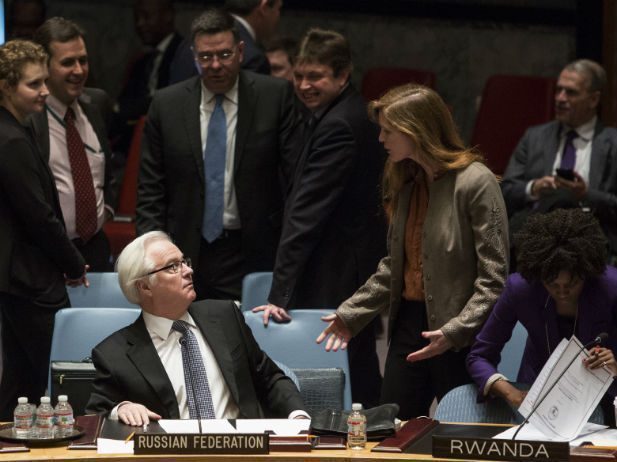 “Yet again, US’ ‘diplomacy’ threatens to further destabilize the Middle East. After NATO murdered Syrian soldiers in broad daylight – an act of war against Syria and, arguably, against Russia – by conducting airstrikes on behalf of ISIS, US Ambassador to the UN Samantha Power had the gall to walk out of a emergency UN Security Council meeting on the matter. Instead of responding sanely to Russia’s request for information, Powers completely side-stepped the issue and, delusional as ever, demanded that Russia pressure Syria to ‘push for peace’. Stunned, her Russian counterpart Vitaly Churkin called her walk-out an act of ‘unprecedented contempt.‘ 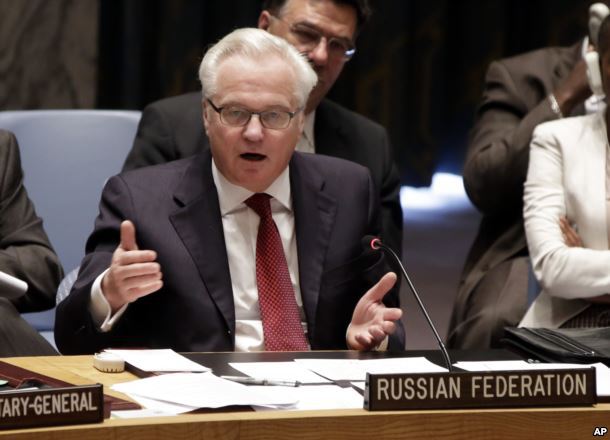 “Asthenic psychopaths are, among other things, hypersensitive and full of dreams of reforming the world, seeking to ‘save it’ in their own crazy way. The result is typically mass murder, which in no way deters them from pursuing their ‘ideal world.’ They are easily found in literary and political milieus, where they seek to impose their false idealism on others. There’s also one to be found inside Samantha Powers’ head.”
Churkin went on to say: “What I saw today, unfortunately, was very concerning, as my American colleague Samantha Power behaved very strangely to say the least.” It’s obvious that things are bad when even seasoned diplomats like Churkin are compelled to comment on the strange behavior of their colleagues. But then, again, Power herself is a unique type of crazy. The ‘asthenic’ psychopath as described by Lobaczewski is relevant here. 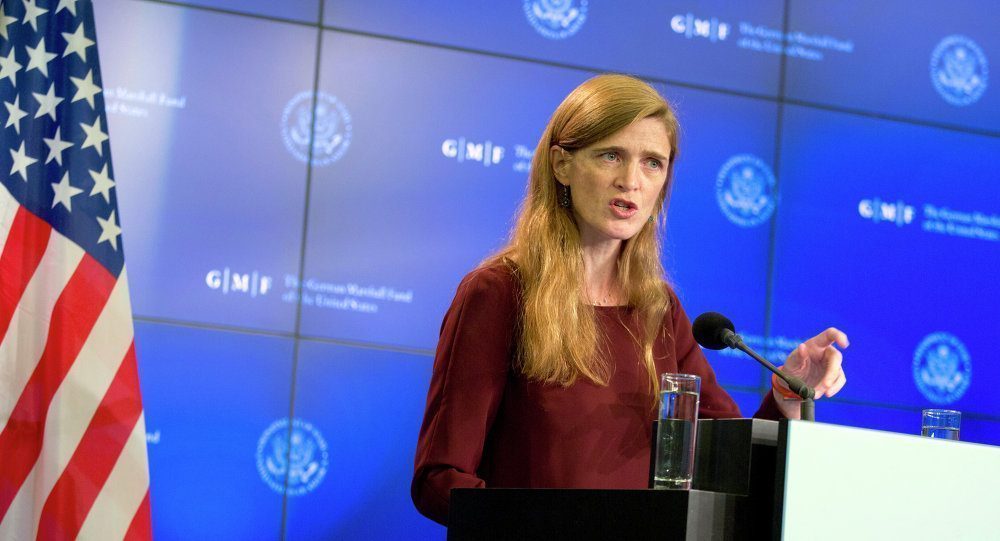 Individuals like Samantha Power, who advocated for the ‘kill them to save them’ bombings of Kosovo, the all-out genocidal ‘humanitarian intervention’ that led to the destruction of Libya, and more destruction in Syria, definitely fit the bill, as do many other ‘neoliberal’ warmongerers. But as Dan Sanchez wrote, Power seems to actually believe in her personal ‘heroism’ despite all evidence to the contrary. She likely does believe it – after all, psychopaths of all types live inner lives of the utmost delusional grandiosity:
“Saving African women and children from terrorists, warlords, ebola, and poverty is the cover story for the drone bases, troop deployments, and built-up proxy armies. But, as always, resource extraction and military dominance are the real motivations.”
https://www.sott.net/article/328670-Samantha-Power-loses-it-walks-out-of-UN-meeting-on-US-airstrike-against-Syrian-soldiers
Dianne