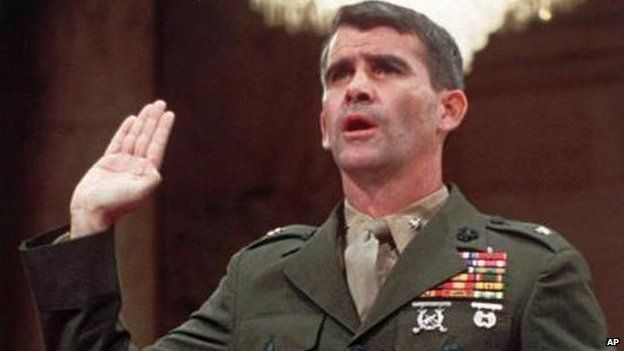 Oliver North let loose on Obama and his war on terror in the middle east, “”If I knew the answers to what’s going on in this man’s heart and head I could probably deal with it a little better, but I don’t.”

He blasted Obama on the weapons of mass destruction in this war as being the vehicular-borne suicide truck containing thousands of pounds of explosives in it, which ISIS drives into the middle of a city, blow it up, and knocks down an entire city block.

“This administration, for reasons that they’ll have to answer for perhaps decades from now for failing to stand up to this genocide, they’re going to be held morally responsible for what’s happened out there.” stated North.

I have something to add to North’s observation on the present administration.  The war on the phony terror goes back to the Bush family, and predates to the Clintons, all the way back to daddy Bush and his entire New World Order establishment concepts not to mention Reagan and Carter.  All along the way administrations past and present have had their part in adding needed pieces to build the sham.  It was not until the internet made it possible for many to research and dig up the old bones of deception that the masses were able to see behind the veil.  The rapid pace at which the propaganda climbed and the bold disrespect shown to high official seats along with the blatant lawlessness made it obvious that we were not in Kansas anymore and clicking our heels together did not take us home.

The time has come for a bold new action.  Many have ideas as to what that action might pertain, but as the Wizard will tell you, the power has been inside us all along.  We will awake, one by one and when we do…it will be a frightful thing to remember all the things that happened in Oz.