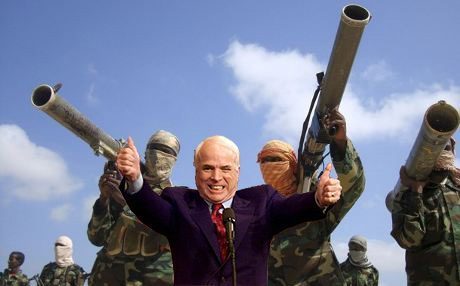 Does America know that McCain tweeted Putin a death threat?  Saying what happened to Gaddafi  will befall him?  I don’t think so.  Why is he even still in office?  He has a hand grenade in one hand and a walking cane in the other.  Please someone tell him to go home.

And by the way, isn’t that a treasonous act?

In 2013, Senator John McCain  sent a twitter message to Putin, forecasting Putin the same destiny as that of Gaddafi. (which was regime toppling and death).   Why didn’t the media ever talk about this?  It sure would have been nice to know that a U.S. Senator was sending a threat to the leader of a world super power like Russia.  That is headline material! At the time, Putin was asked at a press conference if he thought that was an empty threat or a real western initiative?

Putin responded, “Well about the “friend” part, you are seriously exaggerating, that is the person messaging is exaggerating. I am of course familiar with Mr. McCain, we met at the Munich conference, I think? First of all, I have read this yes,  and what can I say? It wasn’t actually directed at me personally, it was directed at the fate of Russia.  Some people would like to see Russia move aside. Just so it doesn’t get in the way of the hegemony.  They are still wary of our nuclear potential.  This is the reason we are able to practice independent politics. This is the reason Russia has paid particular attention to the “irritant” on the international arena. We have our own opinions. We conduct independent foreign policy and will continue to do so in the future. This is bound to be annoying to someone.

“Secondly the west is not homogenous. We have more allies than we have enemies. And my final comment, Mr. McCain as is known is a Vietnam veteran. I would suppose his hands are elbow deep in civilian blood.  It appears he just cannot get by without repeated scenes that are atrocious to us of the murder of Gaddafi.  On TV screens around the world we were shown his murder where he was drenched in blood. Is this what you call democracy? How did they do it? Using drones they delivered a blow on his battalion then over the radio to special forces, which shouldn’t have been on the territory, they brought in a camera crew as well as opposition rebels.  And they murdered him without a trace or trial. If he was captured it should have been up to the people to decide his fate via democratic methods. Yes it’s difficult and it takes time but nothing else is acceptable.

“So Mr. McCain, as is known, was a prisoner of war in Vietnam. They put him not into a prison but into a hole in the ground. That is where he spent many years. And as any many would have, that is where he left his mind. So there’s nothing really to discuss.”

Will someone please tell McCain we have had enough of his war mongering and it is time for him to resign.  He should have been impeached for this act.  Thank goodness Putin understood that McCain was a drooling idiot or we would have had a bad thing going down.