Marco Rubio what have you done? 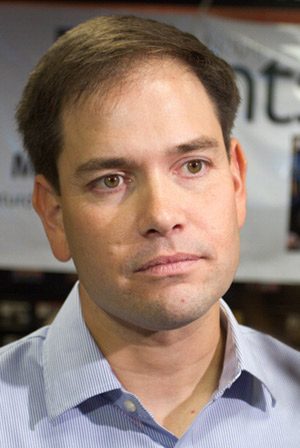 Little boy Senator Marco Rubio cast the deciding vote for Obamatrade on Tuesday as it squeeked through the U.S. Senate 60-37 and he did not even read the bill.

The Trade Promotion Authority (TPA) bill that would fast-track at least three highly secretive trade deals that Obama has been negotiating for years.  TPA will, now that it’s going to pass, effectively ensure the congressional approval of the Trans Pacific Partnership (TPP), Trade in Services Agreement (TiSA) and Transatlantic Trade and Investment Partnership (T-TIP). The text of the TiSA and T-TIP agreements is currently entirely secretive, even to lawmakers on Capitol Hill and their staffs, though WikiLeaks did uncover several TiSA documents that leaked and prove the deal would surrender congressional power over U.S. immigration policy to the executive branch and perhaps to a newly created transnational entity. (to read more click link below)

At this stage of America ‘s decline, when it is hanging by a thread, the last thing “we the people” need is a “so what” attitude while committing a downright treasonous act. And yes, I am calling it treasonous for  Rubio just handed Obama the power to do what ever he darn well pleases with illegal immigrants and amnesty. Rubio should be yanked out of office. The people of Florida have the power to recall him and I suggest they do that now !

If I sound mad, I am not alone. Rubio had plenty of flack from his peers and others.  This Trade act was one of Obama’s special private bills, the kind that “You have to pass it to see what’s in it – Pelosi type top secret deals”  The only way to read it was to take the time and effort to do so, something little Marco failed to do.  To read it Senators had to go to a secret room inside the Capitol basement for classified readings and read it in person, they could not take notes, and only their staffers with high enough security clearances could go in with them to read it—and their staff could not go in without them.

It was one of those pat your head and rub your stomach at the same time while you hop on your left foot and count to ten backwards.

Now after 7 years of Obama’s secret deals, and especially after the Iran Trade Deal where the Obama executive branch pulled the same underhanded deceit, Little Boy Rubio should have had a clue that this was not a good deal.  But, it all made sense after I recalled the CNN debate.  Remember when Donald Trump called little Marco out on his voting absences in the Senate? I sure do.   Rubio did what he does best – he blamed others and blew it off.

Little Marco looking a bit stunned by the question, held his head up high and with self righteous indignation answered smugly and firm,

“You’re right, I have missed some votes, and I’ll tell you why, Mr. Trump. Because in my years in the Senate, I’ve figured out very quickly that the political establishment in Washington, D.C. in both political parties is completely out of touch with the lives of our people,

“That’s why I’m missing votes. Because I am leaving the Senate, I’m not running for re-election, and I’m running for president because I know this: unless we have the right president, we cannot make America fulfill its potential, but with the right person in office, the 21st century can be the greatest era that our nation has ever known.”

Here’s where I pause and let you read his words of presidential wisdom once again.  I had to read it several times before it all soaked in.

So he just blew off any self responsibility to do what his constituents voted him into office to do, which was to read the bills and vote in good conscience to represent their needs.  Instead he belittled the entire senatorial process and did not even bother to read what he was casting a deciding vote for. A vote that would affect our lives, our children’s lives and all future generations.  Why?  Because HE DECIDED HE WAS LEAVING THE SENATE AND GOING TO BE PRESIDENT INSTEAD?  Or was he a puppet and following some type of pay off for someone?

Little Marco should clean out his desk now and leave the Senate. On his way out, somebody should tell him he need not stick around for the rest of the Presidential run.  The deal he just made with the devil has backfired big time and the devil himself is laughing.

Why do I call it a deal with the devil?  Because Little Marco was well aware (with all his years in the senate) what it means to cast a deciding vote against the conscience of his constituents, let alone a bill that would hand the power of congress over to the President.  Yet, he handed Obama his Trade act as easily as Justice Roberts handed him the Obama Care Act.

Let’s read again the last part of what Little Marco said, “unless we have the right president, we cannot make America fulfill its potential,with the right person in office, the 21st century can be the greatest era that our nation has ever known.”

This one statement told the story. Although the rest of the answer told a lot about the boy, this one reveals Rubio’s agenda.  It is the  one for the 21st century.  I immediately thought, “Who has he been talking to?”  The words are forceful – “right president?” – “make America?” “right person ?”  “21st century?” “greatest era?”  “ever known?”

All we need to add is a Heil Hitler at the end and you have all the makings of a Chuck Schumer Gang of 8 coaching Rubio how to get their “amnesty package” passed.   Remember the old trick that is used in business?  It’s easier to apologize for not reading fine print than to admit you read it and signed it anyway.  But, then again, when you declare on stage at a debate that you are leaving the senate anyway??  Who cares?  Especially if you’ve been promised that if you do this for us, we’ll make sure you get what you want?  Note:  That is just my suspicion, nothing more.

Yet, it warrants suspicion.  Senator Jeff Sessions (R-Al) read the bill and said this,

“The TPP text for the Pacific Rim trade deal  would give the Sultan of Brunei—who has implemented Sharia Law in his nation and banned Christmas, literally—an “equal vote to that of the United States,”

That is a pretty alarming comment.  Especially coming from Senator Sessions who has worked on immigration issues for a very long time.

Derry town councilman Mark Osborne also was shocked that Rubio didn’t read the bill before he voted for it.“I would be embarrassed to show for a town council meeting never having read the information that I needed to.

“Senator Rubio already betrayed our trust by joining the Gang of 8 on immigration,” Coakley, who’s launched the Restore Our Honor PAC designed to try to get liberals out of the Republican Party, said in an email.

Mark my words Marco Rubio knew what he was doing. He just handed Obama the permission and power of congress to enact what ever trade deal he wants on immigration and heaven only knows what else was lurking inside.

Our only hope is to read it word by word and line by line to see if it can be thrown out due to it’s unconstitutional basis.  But, then again, that would have to be interpreted by another corrupt legislative branch.  Do we even dare?  What if there is an amendment to the constitution lurking inside?

The only thing I know for certain is that this is far from over.  It is just beginning. Rubio just  betrayed the constitution and every freedom loving American.  In closing I would like to quote a verse.

John 13:27,  (KJV) And after the sop Satan entered into him. Then said Jesus unto him, That thou doest, do quickly.