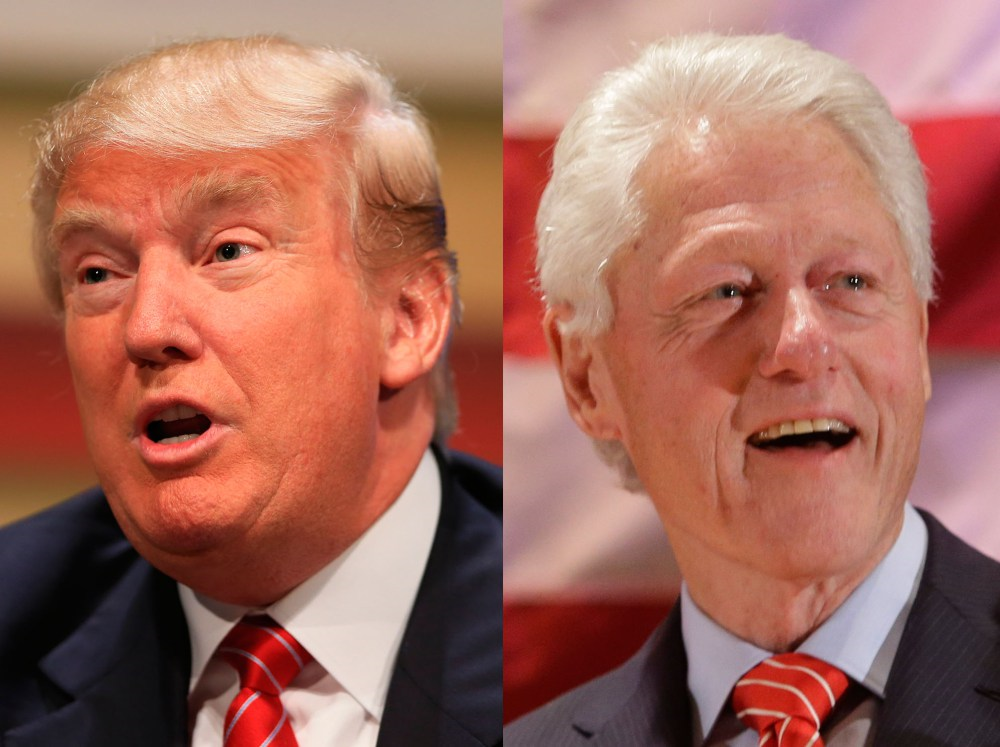 Now I’ve seen an elephant fly. Good grief, what is this country coming too? A new headline reads: “Bill Clinton presidential library will release Donald Trump documents!”
The headline hauntingly resonated with all the mystery of a Hillary email scandal. I was a bit confused? Then I decided to read the rest of the story. Here it is:
“In response to a Freedom of Information Act request, Bill Clinton’s presidential library will release nearly 500 pages of records related to Donald Trump and the Trump Organization, according to the National Archives.”
Wow…Freedom of Information Act request? That sounded important. What could they possibly find in the presidential library? And since the Freedom of Information Act now has access, I wondered if they could get that stack of other papers they were wanting. You know the papers implicating the Clintons in their white water scandal in Arkansas? No. They had more important papers to scour through. Read on:
“The Clinton Presidential records proposed for opening consist of email concerning birthday notes sent from President Clinton to Mr. Trump. Email also includes references to his campaign for President in 1999,” a National Archives notice from Jan. 14 reads.
The 464 pages of documents could resurface questions about Trump’s once-friendly relationship with the political couple — an association from which the current GOP frontrunner has tried hard to distance himself.”
That is when my head started to hurt. Good grief. I mean really? This is like having an old friend, then things go sour and you move on. You don’t chum around anymore and are on speaking terms but that’s all. Then someone tries to make it into something? So look up all emails, and birthday cards, wedding invitations and emails saying congratulations, or I have some Met’s tickets. Maybe they will find some juicy information like a Trump email stating, “Bill, next time you get away to New York you are welcome to stay at Trump Towers.” This is pretty lame.
But then came the drama in the story….
“Earlier this month, Trump launched a series of personal attacks against the Clintons while on the campaign trail, even comparing the former president’s sexual history to that of Bill Cosby’s, the sitcom star recently charged with sexual assault allegations.”
Hello? Wasn’t it Hillary that launched a series of personal attacks against Trump? Yea at the democratic debate and on the campaign trail. She accused Trump of being sexist. Yea, that’s how it really went down. But then…it gets really pathetic and I didn’t know whether to laugh or laugh real hard:
“Other entries in the presidential library database include “a photograph of President Clinton with Donald Trump at Trump Towers in New York, an autographed copy of Mr. Trump’s book The Art of the Deal, and briefing materials for press events that include media questions about Mr. Trump’s possible run for the presidency in 2000.”
Looks like a real mystery to me. What would we do with out the Freedom of Information Act taken seriously for a supposed scandal and ignored when congress asks? The article went on to say –
“The Clinton library is set to release the documents on April 11, 2016, provided the former or current presidents do not request a delay.”
I understood former president….but I scratched my head on “current” president. Does this somehow include Obama? Time will tell. Meanwhile I thought in my head just how an interview on this scandal might go…..here is what went through my mind:
Reporter: “So… the Clintons were at your wedding!”
Trump: ” I’ve always said, they were at my wedding.”
Reporter: “aha! But, now we have proof!”
Trump: Rolls eyes and shakes head. Makes funny gesture with corner of lip.
Reporter: ” We have a photo proving the Clintons were at Trump Towers!”
Trump: “Many people come to Trump Towers. It’s one of the most fantastic buildings in New York.”
Reporter: ” Ahah! So you admit they were there!”
Trump. “Yes. Trump Towers is a wonderful brand. A magnificent brand. We have some of the most beautiful buildings in the world.  Who wouldn’t want to come there?”
Reporter: “I see you have been with the Clintons 49 different times. And wrote 35 letters, and 369 emails.”
Trump: “I don’t know I never counted.”
Reporter: ” Ahah! So you deny it.”
Trump, “I said, I never counted. What was the point in counting?”
Reporter: “The point is, now you deny it by not answering the question.”
Trump, “Look, I’m a busy man. I build buildings. I don’t take a yearly census to see how many times I see someone.”
Reporter: “Aha! You….” Trump interrupting…”This interview is over -get a life.”
Reporter: “But, I ….Trump interrupting… “Sad, you’re a very sad man.”
Trump shakes his head and leaves. Reporter turns to camera man…
Reporter: “Did you get all that, all of it?”
Camera man nods
Reporter: “Even the part where he walked away?”
Camera man: “Yep.”
Reporter: “Can you edit that part…speed it up or something so it looks like he stormed off mad?”
Camera man: “Sad, you’re a very sad man.”
The End.
Dianne Marshall
See story here:  https://thewebnews.tk/2016/01/22/bill-clinton-presidential-library-will-release-donald-trump-documents/