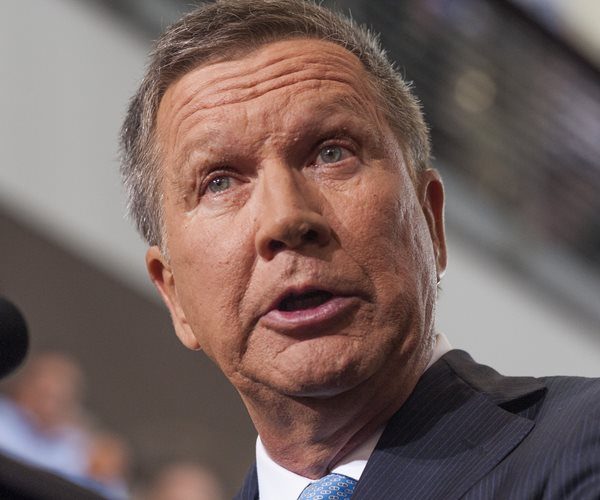 Ohio Governor Kasich and RINO Obama lover is not a conservative, nor is he looking like a Republican to his own state of Ohio.  Please read the letter written to Brett Bair at Fox News, by Mike Snead below.  He is the President of the Dayton TEA Party.
The letter was written to refute Mr. Baier’s assertion that Ohio Gov. John Kasich is a conservative Republican
Snead knows that when  it comes to Kasich “Something wicked this way comes.”
“Gov. Kasich is his own person, advocating his own personal political agenda. Hence, to label him as a conservative Republican has no basis in fact. Rather, Gov. Kasich can only be defined by his rhetoric and, most importantly, his public policy and political actions — all of which, as discussed above, are clearly progressive and not conservative as grassroots Republicans understand the term “conservative” to mean.” Mike Snead
Read full letter here:

Trouble on the Right in Ohio for Kasich

It seems that Kasich led an advertising propaganda campaign to sway Ohio voters against Romney and led in favor of Obama in the 2012 election.  Do you not see what the Obama Democrat liar Kasich is now doing with the GOP frontrunner Trump?    Please let every one know what he is doing and has done.  He is what Facebook users call a TROLL.
Dianne Marshall