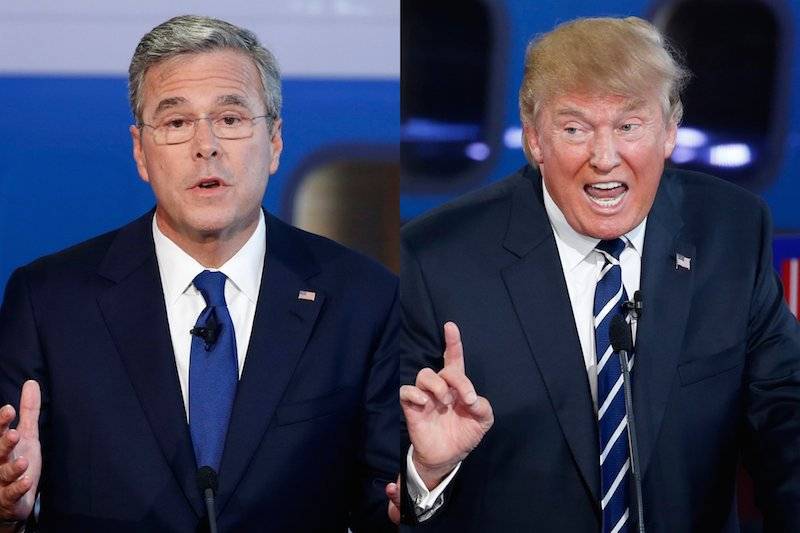 Jeb, if it felt good to say Trump is a jerk to fourteen people at your town hall meeting, it shows how small your vision is. Now, for once in your life, imagine the zeal Trump feels when he addresses mega thousands at a rally and feels the love….and doesn’t have to say anything except, “I love you too!”
I’m sorry, I know that had to hurt.  But the point is- that is reality. So quit painting your abuse picture, and quit trying to figure out how to come back at a man who has the love and respect from over half of America.  It just isn’t helping you at all.  The more you trash the more his supporters come out to defend him.  For unless you haven’t let it soak in yet, Trump has millions of loyal supporters and mega thousands who attend his rallies, where you are hosting town halls with a set of groupies, who for some reason listen as you huff and you puff to blow Trump Towers down.  When you are done, the Trump Towers are standing and you just look a lot worse.  Yep, every time.
Go home Bush, and read some books.  Relax.  Start with reading “The Art Of The Deal”, by Donald J. Trump. It’s never too late.  You may want to run for dog catcher and heaven forbid if you lose that one.
Dianne Marshall
TRUMP IS THE MAN, TRUMP IS THE NEXT PRESIDENT OF THE UNITED STATES OF AMERICA.  Bush Jebby baby, it’s not about you, it’s about America. The kicker is will the people incarcerate Obama before he does more damage or ignore him?  He has committed treasonous acts that deserve attention….if not now…when?
Act America, act now.
Meanwhile, Bush you are an embarrassment Those that differ on the opinion given…read more here: https://rawconservative.com/2015/12/weakjeb/
Dianne Marshall