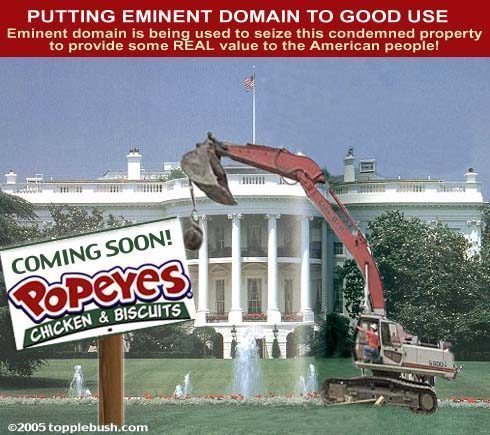 It’s one thing to offer a home owner up to $5 million in repeated offers to buy a piece of property worth 6 figures, and walk away when it is clear the answer is no, as in the Case of Vera versus Trump. Of which the property is still standing, only to be looked upon as a run down eye sore.
It is also important to note that Trump’s casino investments in Atlantic City helped to turn a run down area that was on the skids, into a thriving hot spot on the map. Yes, that’s right. Atlantic City was run down and on it’s Detroit styled economic death bed until Trump invested in it and built it up, making it the thriving Atlantic City tourist attraction we all came to know an love, in spite of a rather out of place building standing out in the middle.
It is quite another thing to use your government clout to actually seize property under the eminent domain opportunities that Jeb Bush agreed to at the debate, but failed to explain his families underhanded familiarity of the use of eminent domain for underhanded PRIVATE deals he so boldly and falsely blamed Trump of doing.
What is now kind of front page news again is the Bush scandal of 2005 – abusing eminent domain to cushion his own private sector interests.
“(The Chicago Tribune reported in July 2005 that)“members of the Mathes family [the owners of the property that was condemned to build the stadium] thought their 13 acres were worth $7.5 million, [but] were offered $817,000 to make way for the baseball stadium. After many years in court and substantial lawyers’ fees, they got the $7.5 million.”
That … set of facts – an offer of $817,000 for a $7.5 million property – suggests the nature of what we’re up against. It looks like grand larceny.
The Rangers new owners apparently refused to pay the court-ordered $7.5 million settlement for the land Mr. Bush seized (through eminent domain). As a reader from Arlington wrote last week:
The Rangers refused to pay the difference to the Mathes family, which forced the City of Arlington to pay it in order to protect its bond rating. This in turn caused increased taxes and decreased services – all to make that little moron even wealthier than he already was.”
Read more here: https://www.pensitoreview.com/2005/11/08/more-on-bushs-eminent-domain-14-mil-windfall/
https://www.youtube.com/watch?v=39tg54LNZvU
So there you have it folks. Eminent domain can be good, and it can be bad. It can also be scandalous. Jeb needs to learn when to just be quiet, but, obviously he is among the other establishment elite who believe the people have no memories, and are uninformed illiterates that must be pushed and shown who to vote for as we can’t make intelligent decisions.
Also read: https://makethemaccountable.com/tax/SaleOfBaseballTeam.htm
https://quadrangleonline.com/2016/02/07/jeb-bush-and-donald-trump-have-a-heated-exchange-over/
Dianne Marshall