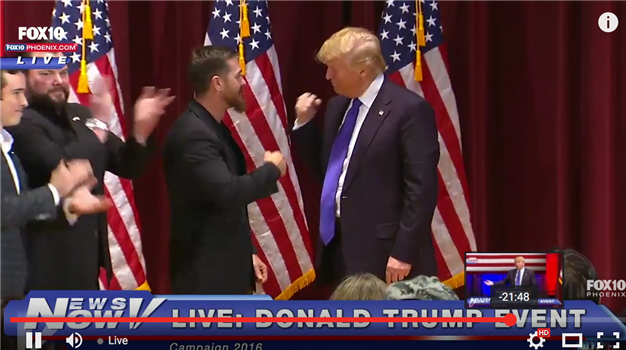 The argument that- quote, “If Trump can’t handle Kelly what will he do with world dictators” is getting very old and tiresome. I have ignored these because they are made by Fox News Magpie repeaters…mere parrots of weak attackers.
Come on folks, do you really think a good commander in chief would ever allow any dictator that disrespectfully rips at, bashes, trashes, and spews lies about him and the Americans he serves (in this case Trump supporters) to have an audience with him? Heck no. A real commander in chief would cut ties, place sanctions and leave them flat, then decide if any other action were needed.
You don’t sit down with  angry gorillas and expect them to act like civilized human beings. They just aren’t capable of it. They are a waste of time. I want a commander that will do as Donald and take the time he would have wasted appeasing wicked losers, and instead use his time to be productive for Americans…in this case he raised 6 million for our veterans and gave them a big ‘THANK YOU’.
In the meantime those hate filled spewers went on with their eating frenzie of the other candidates the same as any disrespectful third world dictator who lies would have done. Only my commander in chief showed what a real leader is and what a real leader must do. Boycott those who want to harm us, cut them off and move forward doing something of substance. In this case, giving great respect to our military men and women who have fought for our freedom and deserve great praise!

THANK YOU TO ALL THE BRAVE MEN AND WOMEN IN OUR MILITARY WHO PROTECT AMERICA AND TO ALL OF OUR VETERANS AND WOUNDED WARRIORS, AND THANK YOU TO DONALD JOHN TRUMP FOR PUTTING THEM FIRST!
Dianne Marshall