Watching the news and reading the terrible backlash they are getting by being liars is amazing.  It left me pondering why they would be so stupid.  Especially when the majority of the commentary rock stars have law degrees or other impressive resumes.  I mean these are presumably smart people. At least they were when they were hired.  Albeit a few were always questionable. But now the Saturday Night Live skits are more truthful then cable news.

Then it hit me.  Key words “Celebrity Commentators”….  “Rock Star Media”…..”Handlers”. It started making sense.  Celebrity film and rock stars are owned by the same media machines that own the celebrity commentators.  Why wouldn’t the same mind games they play on stars be played on them.  We all see what has happened to Glenn Beck. He’s dribbling like an idiot these days.  Hollywood builds them up and when they’re done, they tare them down.

Why wouldn’t they apply their same formula to cable network news celebs?  They are all nothing more than entertainers.  They are great at bringing you faux news and false flags.  Full of sway to get you believing things that never took place.

After all Bill O’Reilly just Killed Lincoln, Kennedy, and Jesus.  Maybe they want to get rid of the Bloviated King and bring in some fresh blood for a lot less dough? Hey it’s a thought.

And now that they’re fully aware that they’ve  over paid Megyn Kelly, why not let her hang herself like Britney Spears and go down in style? I almost believe the Trump attendee plant was paid for by Kelly herself.  Maybe it was just her idea and Roger paid for it? We may never know. Maybe the whole idea was Rogers and Kelly just high fived him and said –  game on?

Then comes the Trump fans.  They accused them of having a “Beatle Mania” moment and the Trump attraction will fade like an ice cube in the hot searing sun. Well, they are losing it.  At least their memory. Will someone please tell them the Beatle Mania never went away.  To this day there are still die hard Beatle fans.  I don’t see many fans for past commentators.  Does anyone remember their names? Do they think about them in the morning and say to themselves, “Gee what ever happened to????” I’m sorry, other than Walter Cronkite I can’t think of any names to place here.  But, I assure you I have never  wondered about him.

In a nutshell, all the cable news channels are in bed with the same script writer.  They all have the same intro lines, the same opinions, the same green screen film footage with the option to slide in their commentator of choice. Every now and then they allow a little free expression just to keep us watching and to help us forget that they just lied.  It’s like a card game. Give the guy your cheating a chance to win a few hands or he will quit playing.  Keep him in the game until you get every dime. That’s where the ratings come in.

But this time they have gone to far.  Trump fans watch everything Trump.  They have every word he said memorized and every word the audience said memorized. Even all the questions the media asks are memorized.  So when they report, “Trump said this or that…”, it had better be right or you are busted!  Yet, they still don’t understand this thing called intelligent voter.  If they did, they wouldn’t keep insulting them with lies and false polls.

The establishment network owners are either  STUPID – NEEDING TO GET RID OF A FEW MEDIA CELEBS – PLANNING A NEW 21ST CENTURY NEWS CONCEPT or PANICKED OVER TRUMP AND LOSING IT .

The scary thought is what if they are all of the above?

Why do you think they are acting like Saturday Night Live? 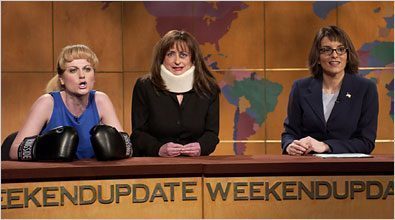 Every thought is welcomed.