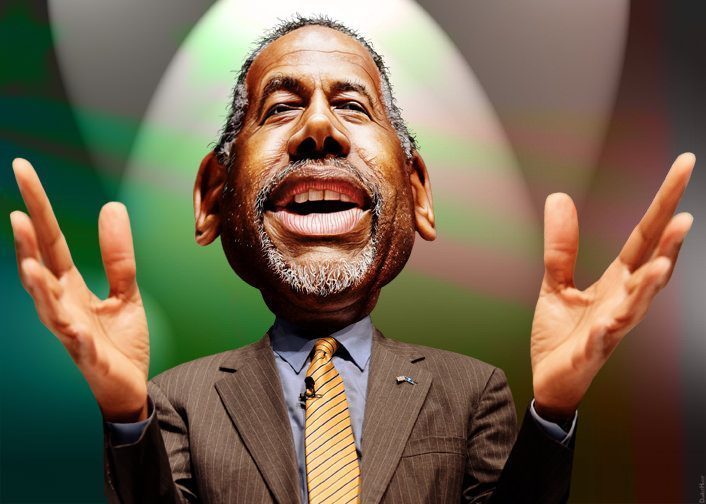 Carson is really becoming down right scary.  It is now apparent that no one who went to school with him can verify any of his anger issues as a child.  No one remembers any of the high school scenes he wrote about in his books.  CNN did investigative research in order to prepare for an interview on New Day and they came up with a startling empty hand at any one who knew him when he was this out of control angry youth.  What they found was the extreme opposite. Those who knew him are shocked and surprised to hear any of this happened at all.  Even the kid that lived next door and knew the whole family said he had never seen Carson angry.

Dorian Reeves who went to grade school, junior high and high school with him said “I personally do not have knowledge of those incidents.” When learning of these things from in Carson’s book, he said, “I wondered, ‘When did that happen?’

Another person Robert Collier told CNN,  “He got through his day trying not to be noticed.  I remember him having a pocket saver. He had thick glasses. He was skinny and unremarkable.”

Does this sound odd to anyone?

Carson says he was controlled and didn’t let his anger show.  CNN questioned Carson’s campaign advisor Armstrong Williams on why no one knew of Carson’s angry past as a youth.  He blew it off as a witch hunt and told them happy Halloween.  Something is very strange and very odd about the entire persona of Carson.

It is right out of a Sci-Fi  film where someone comes out from no where and decides to do God’s work and writes a fictional past in order to support a community project and gain kudos for being a rag to riches story all the while giving God the credit for a made up fantasy.  But, as long as it helps others and rewards the pockets…it is all good right?  Then as the film progresses you find out that the guy is not who others thought he was. He is a totally different person, but by then it is too late and he has won the presidency.  (Only the audience knows his real self that is hidden from others as it portrays out in the movie).  Then, in the sequel, as president he becomes very deranged and creates turmoil with his passive aggressive actions. So dangerous he becomes that even the puppet masters who created him have no control…  But then again, that is only a Sci-Fi movie concept and a bad B film at that. Just make believe, right?  Right.

The other possibility is ultra mind control but that may be way too far out there.  Then there is the idea that somewhere along the line he got a little help from more than the community action program.  Maybe he was hand-picked to do more….kinda like Obama?  Why else was Carson able to insult him at the prayer breakfast with ease?  Was that all a pre-planned event?  I have to question all of this now, for nothing is as it appears or as it was written by Carson, about Carson, or those that knew Carson. Even those who hired Carson for endorsement who thought they knew Carson, didn’t really know Carson so says Carson.

It could just be that as a loner child he often let his day dreams become reality, or it just may be something else? Something no one has thought of yet?  I am sure Armstrong Williams will think of something.  If not, they will play the card.  The dreaded card.  Hint:  It’s not the Trump card.

Buyer beware. The media is having a hard time fact checking Carson. So far he is found wanting, unless he is running for greatest story teller.