There is only one way Cruz could be getting away with all the fraud.  If this were a movie, it would have to play out that Cruz is in some way connected with the C.I.A.  He and cousin Heidi are bought and owned by the establishment….yet, in real life no one is looking into just how bought and owned they really are.  Or at least his cult followers are ignoring it.

I’ve suspected his father Rafael all along of having government involvement based on his connections in oil and gas exploration from the early sixties and his apparent stroke of luck to get involved with computer programing at a time when no one knew what a computer was, and when most all oil and gas exploration had heavy government ties.  As it still does to this very day.  Follow the oil!
The questions we should be asking are not being raised at all.
How about his great Harvard Law School genius reputation!  It’s a bit paper clipped, or so it seems.  Time will tell what they uncover once they dig around a bit.
https://www.huffpost.com/entry/ted-cruz-drunk-harvard-law-school_n_4251305
https://www.youtube.com/watch?v=tLe9Apcho7Q
https://www.thewire.com/entertainment/2013/11/ted-cruz-hungover-thespian-years/71433/
When watching Ted act be it on the senate floor, on the media biased news, or on the campaign trail…one thing is clear…he can’t just talk.  The world is his stage and he thinks everyone is waiting for his encore.  Well, everyone is not waiting for it….
“In the US Senate, the Tea Party Republican from Texas has continued to seek out a spot at center stage. His enemies — and he has many, including some in his own party — characterize him as power-hungry, self-righteous, driven by single-minded political piety. He even mounted what detractors called a groundless witch hunt, against the presidential nominee for secretary of defense. 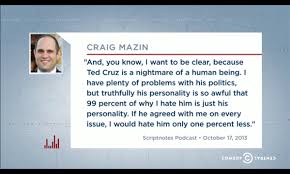 “None of which, to his former Harvard Law classmates, is surprising. Interviews with more than two dozen alumnae and professors fill in a portrait of Cruz, in Cambridge two decades ago, that would be fully recognizable to those who know him now in Washington. He made a lasting impression as someone both arrogant and pretentious, as well as someone unwilling to yield or compromise.
“He never really had an off switch with his debater’s demeanor,” said Ted Ruger, who was president of the Harvard Law Review during Cruz’s third year.

“We just realized that was the way a discussion with Ted was going to go. If you expected something different, you came away shaking your head.”

The man is living in his own little fantasy world.  I don’t want to be a part of his sick wacko reality show playing in his head. Especially when his drama will affect me.  It’s time to call the nut job out!
Mama Fiorina and Teddy boy are not in my reality.  It is  time to wake up from this  Cruz reality fantasy! I don’t want to even imagine a Cruz Fiorina nightmare!
https://www.youtube.com/watch?v=-lrgUrHbsQc&ebc=ANyPxKpFvKkEoWdx-QvsG6IiBYKrYqjddhFBuKk6pCp-GH4ewaw1VjqKF_qn0MQgiGdwFvaQOojR1l6pO4wYYjQnas_Pd00-xg
Dianne Marshall