Crooked Hillary is at it again speaking like it’s 1969 telling the crowds and press that she is more transparent than Trump.  What a crock.  So …  aside from Hillary answering the press’s hard questions today like, “What do you think of the new TV show?”…her transparency is about as clear as a lead vault!
So let’s open that lead vault and give everyone a bit of the transparency she has perhaps forgotten whether she did or didn’t give the American public about her clear bill of health.  Especially while she rests from the flu taking baby steps until the debates. 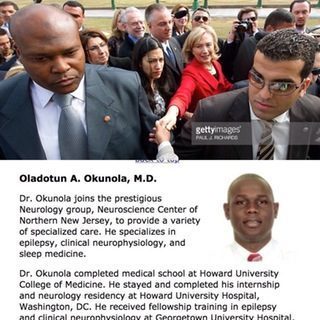 Dr. Okunola completed medical school at Howard University College of Medicine, Washington, D.C., and afterwards stayed to complete his internship and neurology residency. He received fellowship training in epilepsy and clinical neurophysiology at Georgetown University Hospital, Washington, DC. He also completed a sleep medicine fellowship at Norwalk Hospital, Connecticut.
He is not to be confused with her secret service man as the press loves to portray.  But, hey they don’t have to be transparent when she is so crystal clear…right?  Wrong. They are in the same lead box together. 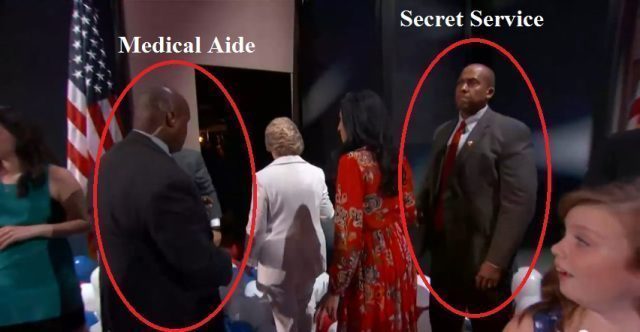 As part of his fellowship training in clinical neurophysiology/epilepsy, Dr. Okunola  focused on intraoperative and epilepsy monitoring; EEG and EMG. As a sleep specialist, he diagnoses and treats sleep related disorders such as daytime sleepiness (hypersomnolence), insomnia, narcolepsy, obstructive, central, and complex sleep apnea, etc.
We all know the doc from this famous photo at her rally when she froze up like a possum. 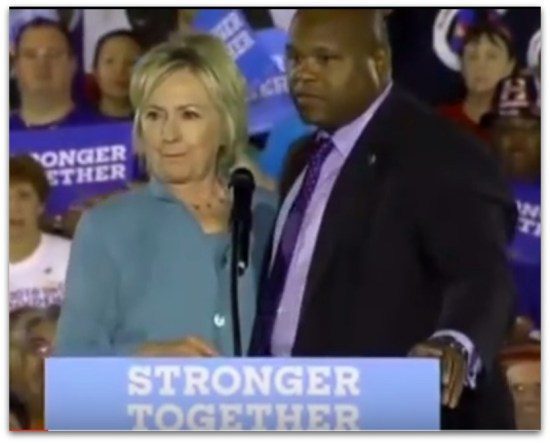 Dr. Okunola is board-certified in both adult neurology and clinical neurophysiology. He is a diplomate of the American Board of Neurology. Today he apparently takes care of Hillary and is the one seen in photos carrying the diazepam pen for her and coaching her to keep talking.
So there is the transparency she thought you all knew.  She is not able to hold herself up for an hour, let alone hold any office!  Now, where is the transparency on her emails, Benghazi, and the Clinton Foundation?  It appears in this regime of lawlessness, of which Hillary has participated in creating for decades, we are  going to have to depend on Assange to dig further into her vault?
By the way….shouldn’t Hillary have a stress test like Trump took for his health report?  I think so.
Dianne