The CFR’s “North America: Time for a New Focus” report, a globalism blueprint, states ‘The Next U.S. President Must Have North American Goals?’ NOT ON TRUMP’S WATCH!

The Council on Foreign Relations are pushing for a shared sovereignty for the United States.  They  are firm with their message that the next president in 2017 MUST HAVE THE NORTH AMERICAN UNION POLICY  as their  PRIORITY.
Awake AMERICA and Take heed- This is very real, and in motion. This is what Trump and ‘we the people’ are all up against.  This is no joking matter and not an election to blow off.  This is our very future!   Trump has literally taken the globalist bull by the horns to save the nation he loves so dearly – AMERICA! 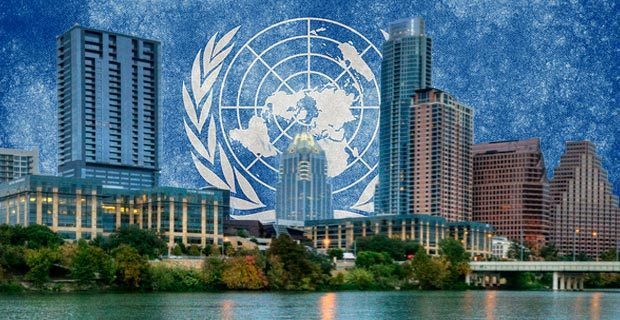 The head of the council on foreign relations, Robert Zoellick is a senior advisor to Goldman Sachs International and is co-chair with Gen. Petraeus of the the CFR’s “North America: Time for a New Focus” report, a globalism blueprint they claim carries an “integration and sovereignty” approach for North America, also known as “North American Union”.
According to Robert Zoellick, North America can become a “new growth market” under integration, rife with exploitable opportunities through a “doubling down” of NAFTA-style policies that they expect 2016 presidential candidates to pursue. The goal is a borderless society and trade, Made In North America branding, backed by presidential support, including through the White House and National Security Council.  Scary stuff, unless you like the establishment new order goals.
Excerpts from the north American task force goals:
“In sum, we recommend a new partnership for North America, a new model for the world of integration and cooperation among sovereign states. The foundation for U.S. foreign policy in years to come should be “Made in North America.”
Organizing the U.S. Federal Government to Shape a North American Policy
“To change the U.S. outlook toward its home continent, North America needs to receive continuous, not episodic, attention. The Task Force recommends designating a senior U.S. official as the North American “champion” who will press for consistent policies across agencies and topics. Given the power relations within the U.S. government, this person would need to be the vice president, secretary of state, secretary of the treasury, or perhaps the national security adviser. The individual’s interest in the role is more important than his or her bureaucratic base. The assignment would need to be backed by presidential support, including through the White House and National Security Council.”
“The Task Force also recommends restructuring the U.S. federal government to develop a North American viewpoint and advance continental policies….”
Who does the Goldman Sachs Robert Zoellick have in mind?  It certainly wasn’t Donald J. Trump.  He can’t be bought and his platform is total opposite on almost every issue on their wish list!
Download and go to the bottom of the article and click on the PDF to read the full report from the Council on Foreign Relation’s. https://truthstreammedia.com/2014/10/06/cfr-2016-candidates-must-build-an-integrated-north-america/
Dianne Marshall