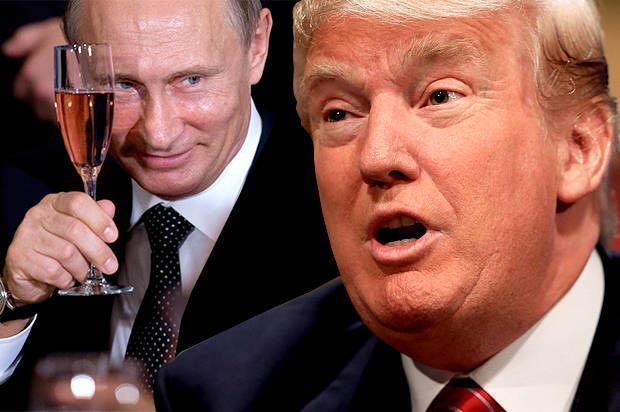 Putin’s praise to Trump was music to my ears. It was obvious he was already pleased with Trump with the invitation to come to Russia when he won the election.  To hear Putin come out and say Trump is Brilliant and outstanding….is a shining star of hope for good relations in the future.
There has been so much written on this subject all day long, I will not elaborate on more of the same.  I choose instead to gloat a bit over Fiorina’s snide remarks at the debate(s).
First of all, at Tuesday night’s debate, Fiorina boldly told the audience that ‘she knew Putin’ and denied to the face book caller and the world, that she said she would not talk to him. (We all heard her say she would not talk to him at the last debate, therefore she lied).  She went on to say, “So as commander in chief, I will not speak to him until we’ve set up that no-fly zone; until we’ve gathered our Sunni-Arab allies and begun to deny ISIS territory; until I’ve called the supreme leader of Iran and told him the new deal – new deal.  We, the United States of America are going to cut off the money flow, which we can do; which we don’t need anyone’s permission or collaboration to do.”
She follows the recipe for WWIII and announces she would commit an act of war by declaring a no-fly zone.  But, she had a plan, and she gave it away on the stage – but, she didn’t specifically state where that no fly zone would be??
She proudly went on to say very snidely, of her plans with Putin, “And I will not speak to him personally until we’ve rebuilt the 6th fleet a little bit right under his nose; rebuilt the missile defense program in Poland right under his nose; and conducted a few military exercises in the Baltic states.”
Well, while she would do all that right under his nose, I am sure if Putin was watching he was rolling his eyes and snickering.  She is running on a ‘beat Hillary’ gender based campaign, claims to know Putin, boasts that she knows the Iran Supreme leader and can’t even get any more than 2 percent of the vote, which after the debate, I am sure her numbers sunk down to zero.
At the previous debate in November Carly chided at Trump for comparing himself and Putin as ‘stable mates of sorts’. Fiorina jumped in and boldly stated that she actually had a real meeting with Putin and not in a green room, (alluding that Trump had said that).  Well, it turns out she did meet with him in a green room setting, not in a real meeting. It  was also clear she either did not know what the term ‘stable mates of sorts’ meant or she was relying on the audience not to know what it meant.  When Trump referred to himself and Putin as ‘stable mates of sorts’  for being two key persons on Charlie Rose, he meant that he and Putin were of the same caliber.  That is what the term ‘stable mates’ means. (Not green room setting).
I am sure Putin is not worried about Fiorina, nor remembers her from the green room.  But, maybe he did.  I often can’t put a name with the face but do remember many  first impressions from rude Walmart shoppers, or sour puss looking people in the doctors office.  So maybe he did remember her?
One thing is certain, today Putin did not endorse Fiorina, nor did anyone even ask him about her.  Why would they?  She is barely registering…and she don’t like him anyway. That is what she said.
From what I understood, if Fiorina is elected, she is going to gender Putin and the Supreme leader of Iran into some sort of submission because she knows them both and she can?  I think that is what she rambled? I know she has repeatedly stated that ‘gender’ is her secret weapon. Does anyone else’s head hurt yet?
On the positive side – Trump gets a thumbs up from Putin and a terrific endorsement for being a ‘very flamboyant man, very bright and talented, no doubt about it, as well as the absolute leader of the presidential race’.