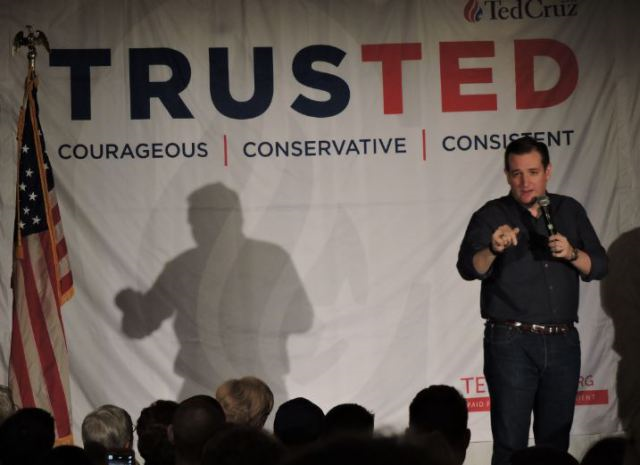 Cruz had repeatedly ignored the issue of his failure to disclose loans from Goldman Sachs and Citibank on his campaign reports saying it was inadvertent and insignificant for he had reported them on personal financial disclosure forms on file with the U.S. Senate, as required of candidates and senators.
Imagine his surprise when Texans for Public Justice filed a complaint with the Federal Election Commission  (FEC) alleging that Ted Cruz purposely hid more than $1 million in loans from major banks during his 2012 Senate campaign.
The allegations mirror details uncovered last week by The New York Times, which found that Cruz had failed to report loans from Goldman Sachs and Citibank to the Federal Election Commission, as required under federal campaign law.
A personal financial disclosure form that Cruz filed with the Senate on July 12, 2012 – three weeks before the runoff with Dewhurst – shows a margin loan from Goldman Sachs valued at $100,000 to $250,000, carrying 3 percent interest. It also shows two Citibank loans, totaling $500,000 to $1 million. None of these is described as a loan to the Senate campaign.
To make matters worse for the slippery conservative Senator, Democracy 21 and the Campaign Legal Center — two campaign watchdog groups — announced their own joint complaint filed with the FEC.
“It is a big deal,” said Craig McDonald of Texans for Public Justice. “He left the voters of Texas in the dark as to who was underwriting this campaign.  Cruz is railing against the big banks and Wall Street, and yet he hid the fact that CitiBank and Goldman were actually providing him the money to run the campaign.”
Funny that those on social media who have been saying the exact same thing have been getting beaten up by the so-called conservative radio hosts like Beck and Levin, not to mention the Cruz supporters who have been railing attacks on any of the messengers reporting these facts. Funny thing about facts, sooner or later you have to deal with them.
The night the Times story broke, he told reporters at a rally in Dorchester, S.C., that “we had a brokerage account that has a standard margin loan like any brokerage account has and we borrowed against the stocks and assets that we had under ordinary terms. Those loans have been disclosed over and over and over again on multiple filings…. All of the information has been public and transparent for many years and that’s the end of that.”
What he didn’t tell them was he loaned the money to his campaign, which was to be repaid later as a campaign debt. I’m sure shrewd Ted had some interest tagged on.
But, that wasn’t the end of that. The next day was the GOP Debate in North Charleston and of course he was asked about it again. His answer was typical Ted thanking the moderator for bringing up that “stunning hit piece.” An interesting part of Cruz’s defense was when he said, “Just about every lobbyist, just about all of the establishment opposed me in the Senate race in Texas, and my opponent in that race (Lt. Gov. David Dewhurst) was worth over $200 million. He put a $25 million check up from his own pocket to fund that campaign.” So, Cruz said, he and his wife Heidi “took a loan against our assets to invest it in that campaign to defend ourselves against those attacks.
All that was missing were violins playing in the background, and rose petals falling from the ceiling. Maybe an Obama tear would have helped a bit? People just weren’t buying it. Especially those who knew the hypocritical campaign story he had been telling to gullible people on the campaign trail of he and his wife Heidi selling all they had and liquidating every asset to do the courageous thing and run for the senate.  All for the selfless act  to stop the Washington Cartel from doing any more evil. The same cartel he and his wife Heidi had cut their teeth on growing their careers.
I agree with what McDonald said, calling Cruz hypocritical for casting the Senate race in David vs. Goliath terms – that he and his wife had sacrificed so much to run against the wealthy Dewhurst – given the true source of the funds.
“This was the antithesis of transparency on his part. It’s hard for us to believe that this was inadvertent,” he said.
Read the full story and with the details here:
https://trailblazersblog.dallasnews.com/2016/01/fec-complaint-filed-against-ted-cruz-for-undisclosed-loans-in-2012-senate-campaign.html/
Dianne Marshall