“The fact that the Embassy Staff has been silenced from testifying cannot be excused or explained.”
Written by Ambassador Stevens cousin, Dr. Charles R. Roots, Senior Pastor, Former Staff Sergeant, USMC Captain, U. S. Navy Chaplain Corps (Ret.)
“Here is my story. A week out the Embassy in Tripoli began receiving multiple tips about an Al Qaeda cell in the area planning an attack on 9/11 in response to the killing of Bin Laden. For the next several days, the state dept. and WH were asked for a security force and were denied at least six times. Ambassador Stevens and his team were given the all clear that the Consulate in Benghazi was safe and there was no need for a security force other than his three personal guards (one being my cousin) and a few Libyans who were not armed.
Then the attack and murders occurred. Immediately the WH claimed it was a protest gone bad over a you tube video. Obama made a quick speech in the Rose Garden on Sept. 12 before catching a plane to Vegas to campaign. He made a generic statement at the end of his speech after placing the blame on an overheated protest over the video. He said “No act of terror will shake the resolve of America. Later that day and over the next 2 days, the liberal media began saying Ambassador Stevens and the other three men died of smoke inhalation. This was not the case.
Out of respect for my cousin, I’m not going to be specific about his murder. However Ambassador Stevens was brutally murdered. His genitals were cut off, he was sodomized and beaten and cut and stabbed and burned. He was drug thru the streets and left for dead. 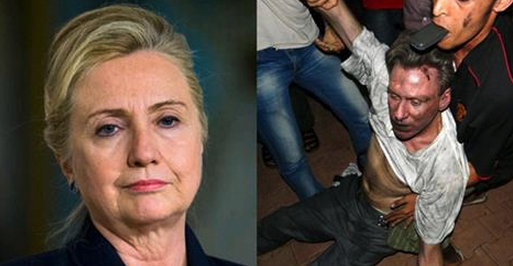 This is eyewitness testimony of a local Dr. who found the Ambassador in a ditch and tried to save his life. He had no idea who he was. The other three men, including my cousin, met similar fates. And deaths due to smoke inhalation is a 100% fabricated LIE.
The next week I drove my aunt and uncle and 2 others to DC to receive his body. We met with Hillary, Panetta, and Susan Rice. ALL of whom apologized and said it was a protest gone bad over a video and exited the area. Next, Obama entered with the same story and didn’t apologize and wasn’t sympathetic. My aunt cried to this man and all he did was hand her flowers and walk away. I tried to get his attention, but didn’t. I got upset and yelled liar to him, he kept walking. Then a secret service agent grabbed my arm and led me to a room where I was held till the proceedings were over. 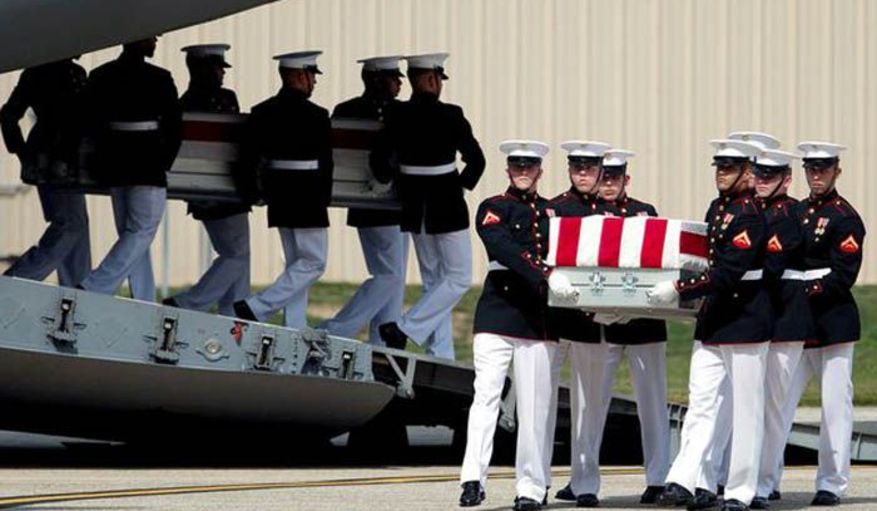 America, I saw firsthand how cold this man is. What kind of liar he is. Most of you haven’t a clue about this tyrant and yet you support him. And act like every word he says is Gospel. These murders and the fast and furious cover ups make Watergate look like a kid who told his bff’s secret to the class.
THIS PART YOU DON’T KNOW, BUT SHOULD. 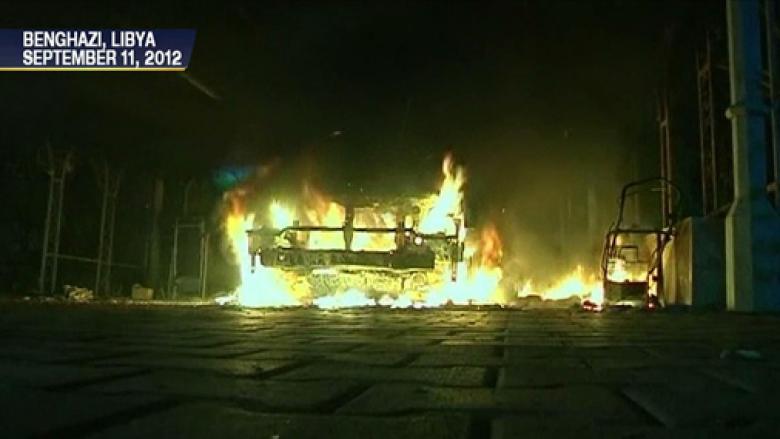 AMERICAN VALOR, BENGHAZI, LIBYA:
The stunning part of this story is that Tyrone Woods and Glen Doherty killed 60 of the attacking force. Once the compound was overrun, the attackers were incensed to discover that just two men had inflicted so much death and destruction.
The news has been full of the attacks on our embassies throughout the Muslim world, and in particular, the deaths of Ambassador Chris Stevens and three others in Benghazi, Libya. However, there’s a little known story of incredible bravery, heroics, and courage that should be the top story.
Ambassador Stephens and Sean Smith, Navy Seal
So what actually happened at the U.S. embassy in Libya? We are learning more about this every day. Ambassador Stevens and Foreign Service officer Sean Smith, along with administrative staff, were working out of temporary quarters due to the fact that in the spring of 2011 during the so-called Arab Spring, the United States cut ties with then president Moammar Gadhafi.
Our embassy was looted and ransacked, causing it to be unusable. It is still in a state of disrepair. Security for embassies and their personnel is to be provided by the host nation. Since Libya has gone through a civil war of sorts in the past 18 months, the current government is very unstable, and therefore, unreliable.
A well-organized attack by radical Muslims was planned specifically targeting the temporary U.S. embassy building. The Libyan security force that was in place to protect our people deserted their post, or joined the attacking force. Either way, our people were in a real fix. And it should be noted that Ambassador Stevens had mentioned on more than one occasion to Secretary of State Hillary Clinton, that he was quite concerned for his personal safety and the welfare of his people.It is thought that Ambassador Stevens was on a “hit list.”
A short distance from the American compound, two Americans were sleeping. They were in Libya as independent contractors working an assignment totally unrelated to our embassy. They also happened to be former Navy Seals. 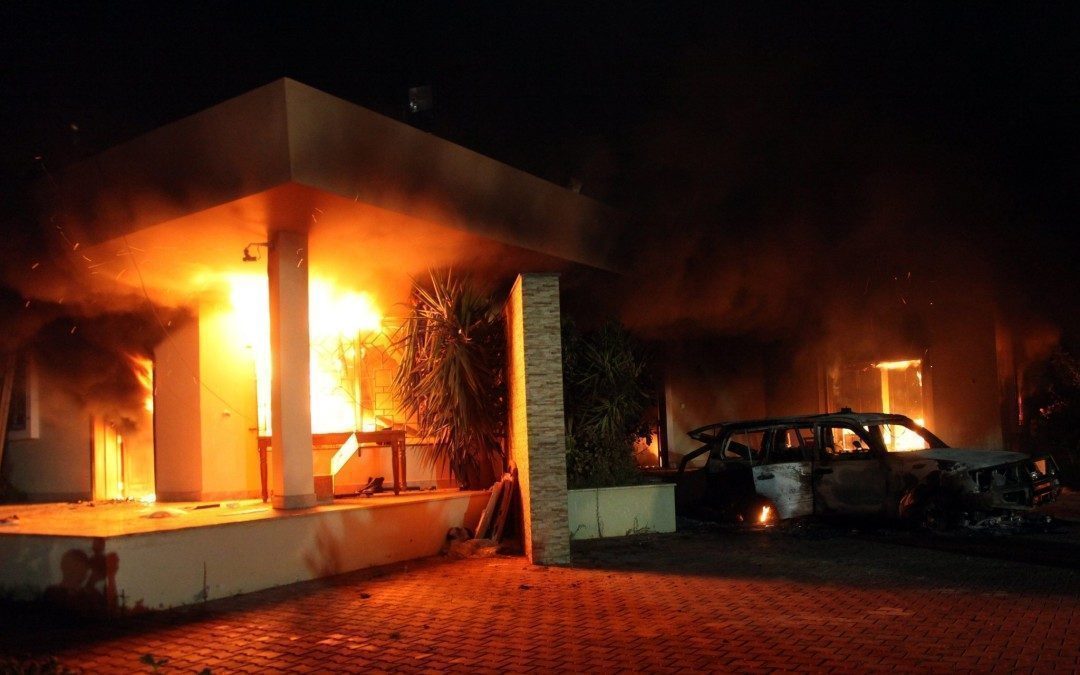 When they heard the noise coming from the attack on our embassy, as you would expect from highly trained warriors, they ran to the fight. Apparently, they had no weapons, but seeing the Libyan guards dropping their guns in their haste in fleeing the scene, Tyrone Woods and Glen Doherty snatched up several of these discarded weapons and prepared to defend the American compound.
Not knowing exactly what was taking place, the two Seals set up a defensive perimeter. Unfortunately Ambassador Stevens was already gravely injured, and Foreign Service officer, Sean Smith, was dead. However, due to their quick action and suppressive fire, twenty administrative personnel in the embassy were able to escape to safety. (But all have been silenced and kept away from congress and all investigations on Benghazi!!!) Eventually, these two courageous men were overwhelmed by the sheer numbers brought against them, an enemy force numbering between 100 to 200 attackers which came in two waves. But the stunning part of the story is that Tyrone Woods and Glen Doherty killed 60 of the attacking force. Once the compound was overrun, the attackers were incensed to discover that just two men had inflicted so much death and destruction. 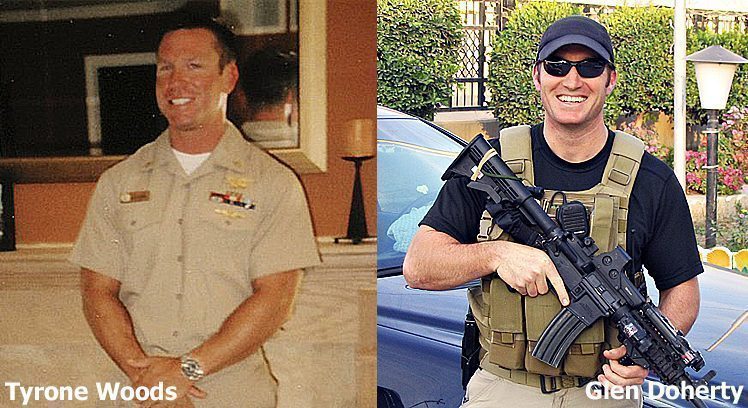 As it became apparent to these selfless heroes, they were definitely going to lose their lives unless some reinforcements showed up in a hurry. As we know now, that was not to be. I’m fairly certain they knew they were going to die in this gun fight, but not before they took a whole lot of bad guys with them!
Consider these tenets of the Navy SEAL Code:
1) Loyalty to Country, Team and Teammate.
2) Serve with Honor and Integrity On and Off the Battlefield,
3) Ready to Lead, Ready to Follow, Never Quit,
4) Take responsibility for your actions and the actions of your teammates,
5) Excel as Warriors through Discipline and Innovation,
6) Train for War, Fight to Win, Defeat our Nation’s Enemies, and…
7) Earn your Trident every day.
Thank you, Tyrone and Glen. To the very last breath, you both lived up to the SEAL Code. You served all of us well. You were courageous in the face of certain death. And Tyrone, even though you never got to hold your newborn son, he will grow up knowing the character and quality of his father, a man among men who sacrificed himself defending others.
Written By Dr. Charles R. Roots, 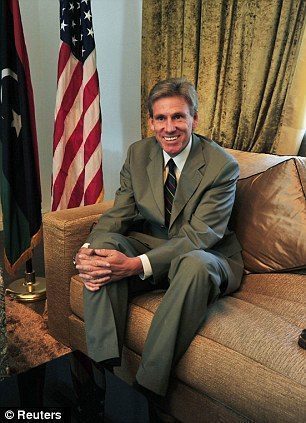 Senior Pastor, Former Staff Sergeant,
USMC Captain, S. Navy Chaplain Corps (Ret.)
This should be passed on and on and on.
NO TRUE AMERICAN WOULD OBJECT TO RECEIVING THIS MORE THAN ONCE… SO PASS IT ON.
And Let us never forget Hillary Clinton’s Comment “What Difference Does It Make?”
And she wants to be our next president! she should be sitting in prison right now!!!