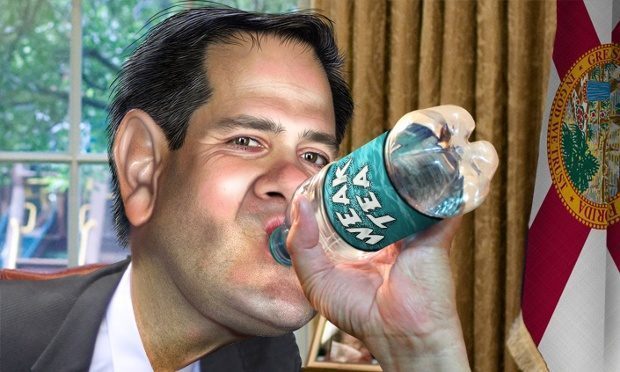 It appears even $millions will leave Marco Rubio sweating and chugging water over finances.  He just can’t seem to understand how to pay anything off, nor does he make wise business decisions.  He simply appears to be looking for the ultimate entitlement program, after all he knows what those are all about or at least he knows how to move back in with his wife’s momma when times are tough as he has did in 2000.  All to serve his country, or so he would have you believe…. but his voting record doesn’t back that up.

He has purchased properties on the interest only plan, and wondered why he got stuck with no equity when it came time to sell?  Blame it on the market, never blame it on shady loan practices.  Think about it, paying an interest only mortgage loan is not good business.  Then look at it again and see that since the year 2000 he has maintained a salary range that earned him at least $4.5 million.  His annual salary ranged from $93K to $400 K a year.  He had nothing to show in a net worth in 2000 and very little to show in 2015. That is pathetic, but he has repeatedly reminded us that he has four kids so that is where his money goes?  Excuse me America – how on earth are you all surviving?

So where did all his money go before he got the book deal?  Or even after?  He recently refinanced his home at a lower interest rate and now pays $1,000 a month mortgage.  Why didn’t he pay his house off?  Isn’t that what regular all-American families would do with a windfall of cash?

Something is just not right here.  Does he gamble?  Is it drugs?  Is it blackmail fees?  What exactly is it?  Does he send money to Cuba?  Offshore tricks?  The guy is a disaster with money, do you really think he could get any deficit down?  He can’t even operate his own affairs without a no ceiling concept…how could he ever budget the nation?

Does he think the president’s $400,000 a year salary will be enough to live off of?  It wasn’t enough for him in the past?  If elected will he need another day job?  After all he has four kids.