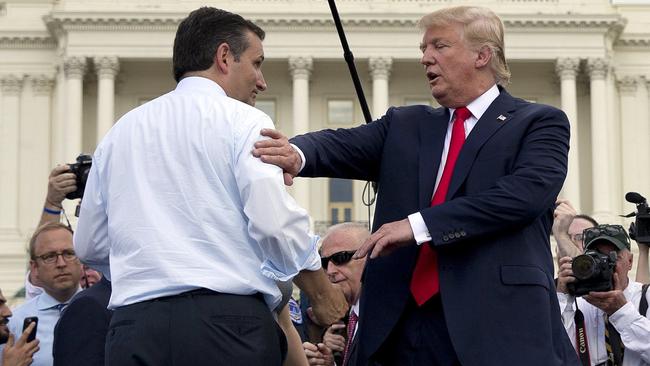 Did Cruz really think, let alone believe, that people were ready to anoint him president in the name of God?  Oh my head hurts.  It was actually Ted’s father that saw the vision and passed that on to Evangelical’s who among those was one, who was a self proclaimed prophet, also made such a claim. He proclaimed that Ted would be either a VP or a supreme court justice. Either way they had a vision of sorts…a self proclaimed idea that they thought by using their religious clout they could force into existence. Well, that is not how God works. Not at all.
That was the most blasphemous thing I have ever heard.  It is one thing if a person believes or says such things, it is another to announce it as a campaign punch.
I do pray that people see this for what it is.  All a big psy-op move.  The Lord will lay it upon the hearts of the people to know what is from him and what is from man.  In my heart, I see this entire move nothing more than bold, blatant misguided self absorption from one who has somehow in the cultic method he has followed, come to believe that what he sees is real and true.
In my world, there is an entirely different picture on the horizon, and it is not the one Cruz has painted.  I see Trump and I see his leadership helping a people from being devoured in far more ways then they can even see for themselves.  I see hope and a future for God’s people that only a man of grit and tenacity,  sent to serve God’s purpose, can ever possibly fulfill. A man sent to lead the masses through this terrible moment that has befallen them.  I see that man as Donald John Trump.
Read more here if you can stomach it.  https://www.breitbart.com/politics/2015/12/31/sen-cruz-tells-volunteers-we-can-win-if-we-awaken-and-energize-the-body-of-christ/?utm_source=feedburner&utm_medium=feed&utm_campaign=Feed%3A+breitbart+%28Breitbart+News%29
Dianne Marshall
You
It is