Cruz lashed out at a rally for service members on the USS Yorktown in South Carolina on the “culture of political correctness” accusing the Pentagon of weakening the military by pushing “gluten free”.
I betcha the service guys all were concerned about that – maybe his spyware data mining showed that was a big problem? 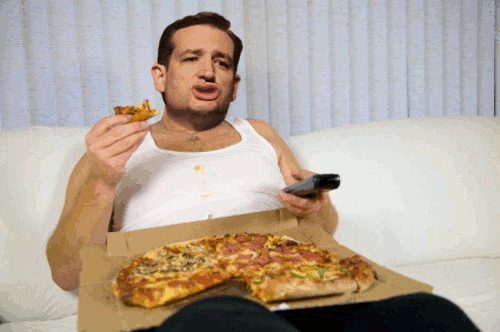 I do not think candidates need to be nosing around in gluten free diets for military. Gluten is not good for many people and you can live without it.
This is what happens when you run out of ideas and you are being exposed for election violations left and right- you attack what people can and cannot eat. I mean was this his best political incorrect shot?  It was as moot to anything helpful as demanding free green eggs and ham for all military soldiers- if he is elected, that is.
In referring to the military’s ready-to-eat meals he said, “”The last thing any commander should need to worry about is the grades he is getting from some plush-bottomed Pentagon bureaucrat for political correctness or social experiments — or providing gluten-free MREs.”
Really Ted?
What I would like to hear is a condemnation for GMO’s and Monsanto. Now that would be a topic for discussion. Therein lies the real “social experiments”. But, I’m sure that would harm his donor base, so instead, let’s attack gluten.
Meanwhile those with Celiac disease and advocates of gluten free diets slammed the Cruz comments.
Oh my head hurts….read the full article here. https://www.abc.net.au/news/2016-02-19/ted-cruz-lashes-out-at-politically-correct-gluten-free-meals/7184600
Dianne Marshall