Cruz’s entire campaign has went south to the border way past Cuba, took a few spins and is now sitting in the Bermuda Triangle – somewhere out there with other lost souls. 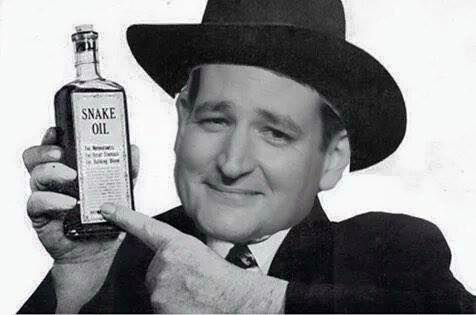 The Cruz campaign has now pulled another “Doc Carson” only this time it is TREY GOWDY who supposedly isn’t showing up to endorse Marco Rubio – but now proudly endorsing Ted Cruz. I’m surprised they didn’t also claim that Rubio encourages others to vote for Ted as well.
When will these guys stop? When will they get a clue as to how horrible they are looking? Needless to say, the South Carolina Congressman Trey Gowdy is not happy.
“In the last week, we have seen a systematic effort by Sen. Cruz and his allies to spread false information and outright lies in the hopes of winning votes by appealing to our lowest common denominator. Now, it’s been reported that a fake Facebook page has been used to fool South Carolinians into thinking that I no longer support Marco Rubio and that I’m instead supporting Ted Cruz.”
My, my….how the Rafael snake slithers no matter what Christian state he is in.

“Nothing could be further from the truth and I’m demanding that Senator Cruz and his campaign repudiate these dishonest and underhanded tactics,” Gowdy continued. “We can have a debate about the future of our party and our country. But we need not leave our integrity behind.”
Trey, I’m afraid it is too late for Cruz, for you cannot leave something like integrity behind when you never had it to begin with. This campaign is proof positive there is none in his entire camp, nor any he is surrounding himself with.
The Face Book page in question is called “Trey Gowdy Prayers,” and has Trey supposedly stating that at the recent debate revealed Rubio’s total lack of integrity, intellect, and foresight and he was switching his endorsement to Ted Cruz.
“To all my Christian and Conservative friends in South Carolina, I hereby formally endorse Ted Cruz for President of the United States.”
A spokesman for Cruz, Rick Tyler smugly touted that Congressman Gowdy was ‘throwing around wild accusations without any evidence whatsoever,’ and claimed the Cruz campaign had nothing to do with the Facebook page.
“This is called a smear campaign,” Tyler said, “And it’s beneath the dignity of a sitting member of the House of Representatives. Does the Marco Rubio campaign really believe it’s going to smear it’s way to victory?”
Wow, is my comment, spoken just like Cruz has recently mocked Trump for accusing the same type of underhanded tactics. Snipping such similar quips. Now we know who is writing all this psyop script. Gas light them and watch them go crazy seems to be the plan. The truth is, people are wide awake and everyone knows exactly what is taking place and who is orchestrating the entire show.

CRUZ IS RUNNING THE MOST DISPICABLE PUBLIC DISPLAY OF FILTHY DEVILISH ACTS EVER WITNESSED IN PUBLIC. He simply is unfit to run for any office and should very well be disqualified from the entire GOP presidential race for fraud and ethics violations.
What will he and his like do next? I believe God is allowing him to do so much so the people drunk on his lies will finally open their eyes. I am sitting back and waiting to see how many will?
Dianne Marshall
https://thehill.com/blogs/ballot-box/269581-rubio-campaign-accuses-cruz-campaign-of-underhanded-tactics
https://www.washingtonexaminer.com/gowdy-calls-for-cruz-to-denounce-underhanded-tactics#.VsPVZHzrVVY.facebook