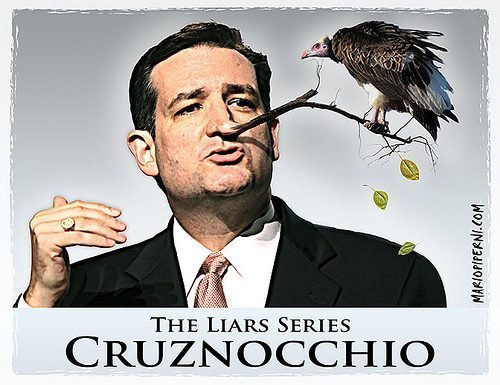 Liar Ted didn’t let a preplanned riot by organized thugs, paid for by George Soros in cooperation with the progressives in Chicago, go by without putting his liar lips all over it.
Stating that Trump encouraged such behavior by not being ‘kissy kiss’ politically correct?  What if the Trump supporters decided to go ballistic and riot Cruz town halls because of Glen’s garbage mouth calling them ALL NAZIS and Trump Hitler!  He can’t blame that all on Beck…he stood their nodding with that snaky grin approving all of the liar messages every time they were spoken, over and over and over again.

So if Cruz wants to say that a candidate is responsible for what his campaign allows????  Let’s start way back in Iowa….we could go back further…but if we started there, it is obvious for all the world to see TED CRUZ IS NOT ELIGIBLE TO RUN FOR OFFICE.  He should have been pulled from the race for election fraud, fined and charged with a court date set. Then there is also the issue of not being natural born.
And for the record, Trump did not encourage bad behavior in his speeches, nor did he allow any hecklers at past rallies to disrupt the event for the thousands who came to listen.  Those who came to create disruption were removed in the same manner disruptive persons are removed at any rally by any party or any local theater, for that matter. Oh, except Hillary,  she screens all her 50 to 100 guests before they can listen to her, and sometimes calls speaking to  just a few at a round table some sort of campaign event?
Dianne Marshall