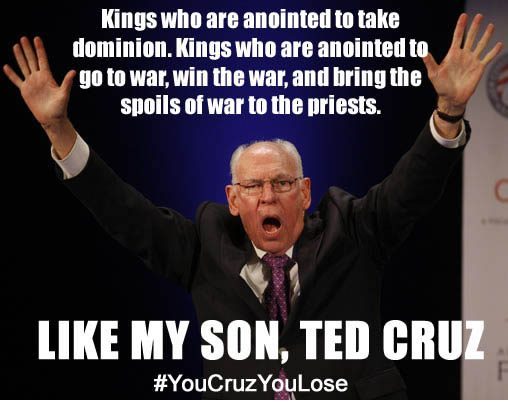 Watch Cruz in 2013 and watch him now.  He has always been an actor, a liar, and guess what….he repeats himself.  He doesn’t change anything that is broken.  Trump and his campaign will do well to watch the guy and know his patterns.  They are tried, they are overdone, and wearing out.  He isn’t capable of doing anything new.  Old patterns are emerging from his Senate campaign run and early days. No one would know if an interview was done today or three years ago….that is how mechanical this guy is.
How about throwing some of the computer programming back in his own lap’s top?  It is exposed that Cruz is a computer program – now hit the hard drive and bring that mother board down! His father helped program him.  Both are repeating exposed lies…both will lose it shortly. Very shortly.

If you want to knock yourself out going through old articles, videos, etc.  please do.  Or simply run with it!  Cruz bots are too drunken with the cult wine to notice anything.  No matter what is said or done, they will call Trump a whiner, Trump supporters liars, and bask in the Cruz photo opt like giddy bots over R2D2.  It’s time to call the liar out, don’t get upset…stay calm and laugh in his liar face. Smile at the liars and Kool-Aid drinkers. Laugh in their faces.  Watch them whine and sniffle.  Smile….always smile.
Dianne Marshall