Arizona is pushing for a revote for delegates to go to Ohio!  They are calling out the voter fraud that just slapped them all in the face!  They are fighting back against this anti-Trump game! Jan Brewer was erased from the voting ballot and she among other delegates are demanding a revote! 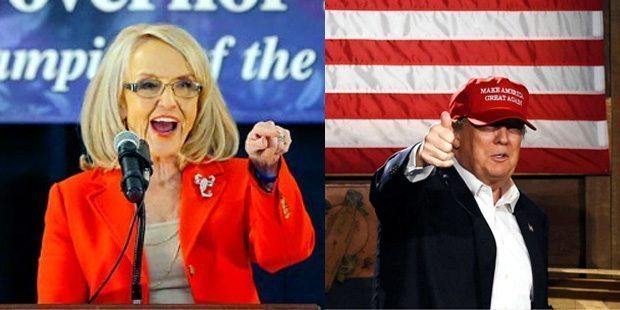 Local news tells the facts about the no shows for Cruz in Indiana.  Reports have been coming in from multiple events and all show pathetic crowds for the Carly and the Cruz.  One event had 33 people.  But lying Cruz doesn’t care about all of that…he is relying on his ground game.  The same game he has been playing from the very beginning in Iowa.  It is called voter fraud, cheating, stealing and lying.  People are angry at the underhanded tactics and Cruz smiles and says all these credible people don’t under stand the rules.

When ever approached on his fraud, Cruz sneers and insults the one asking the questions then smirks calling those with accusations nothing more than poor losers. To make the insults and fraud worse, Cruz….none of that matters for he has a good ground game.  A game called voter fraud  to steal delegate votes.  Jan Brewer former governor of Arizona attests to the fraud in Arizona and is not going to shut up and sit down!

It is about time that Cruz be disqualified for his voting fraud.  These are not the rules – it is voter FRAUD!
https://www.youtube.com/watch?v=As05ZvaybtE
Enough is enough – it is time to recount all the votes and end the establishment bull dozer fraud game!
Dianne Marshall