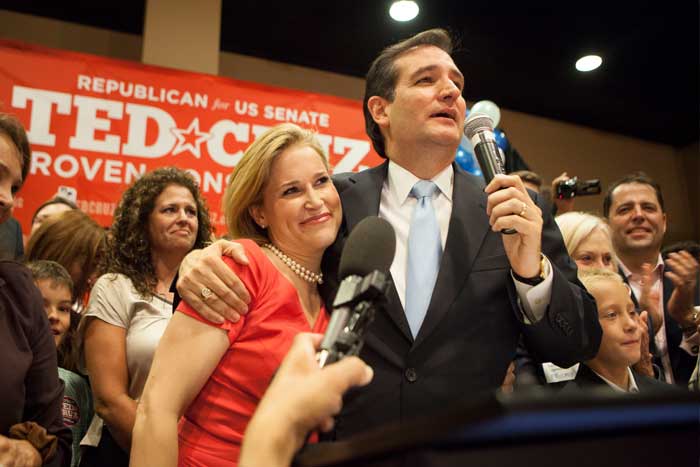 We’ve all heard Ted Cruz tell his story of the day he made up his mind to run for the senate. Ted comes home and says to his darling wife, “I’ve decided to run for senator of Texas.” She smiles with curiosity, then Ted says, “Sweetheart, I’d like us to liquidate our entire net worth, liquid net worth, and put it into the campaign,” and Heidi answers, “If that’s what you want dear, let’s do it.”
Well, that is the story (short version) of how Ted decided to, gosh darn it, just go for it.”
The part of the story Ted isn’t telling anyone is the part where the successful Tea Party-darling receives a large loan from Goldman Sachs, where Mrs. Cruz works. The loan that was not disclosed in Cruz’s campaign finance reports. Ted placed personal funds totaling $960,000 into his Senate campaign, and two months later, he added more money, bringing the total to $1.2 million. In a New York Times interview a few years ago, Ted stated that it was everything they had saved.
The fact is, in a review of personal financial disclosures filed later with the Senate, Ted did not have a liquidation of assets that would have accounted for all the money he spent on his campaign. But, what did show up was that in the first half of 2012, Ted and Heidi Cruz obtained low-interest loans from Goldman Sachs, and Citibank. The loans totaled roughly $750,000 and eventually increased to a maximum of $1 million before being paid down later that year. There was no explanation of the loans purpose.
Neither loan appeared in reports the Ted Cruz for Senate Committee filed with the Federal Election Commission, in which candidates are required to disclose the source of money they borrow to finance their campaigns. Read more here: https://www.nytimes.com/2016/01/14/us/politics/ted-cruz-wall-street-loan-senate-bid-2012.html?smid=tw-bna&_r=1
In 2014, Heidi told Politico that she thought they should apply “common investment sense” and not use their own money for the campaign “unless it made the difference” in winning. The same article did not mention anything about loans from banks.
But, then again, honest ted said, “What astonished me, then and now, was Heidi within 60 seconds said, ‘Absolutely,’ with no hesitation,”  and of course we all heard Cruz say many times, “We put our entire life savings into the campaign for me to run for Senator.”
Dianne Marshall