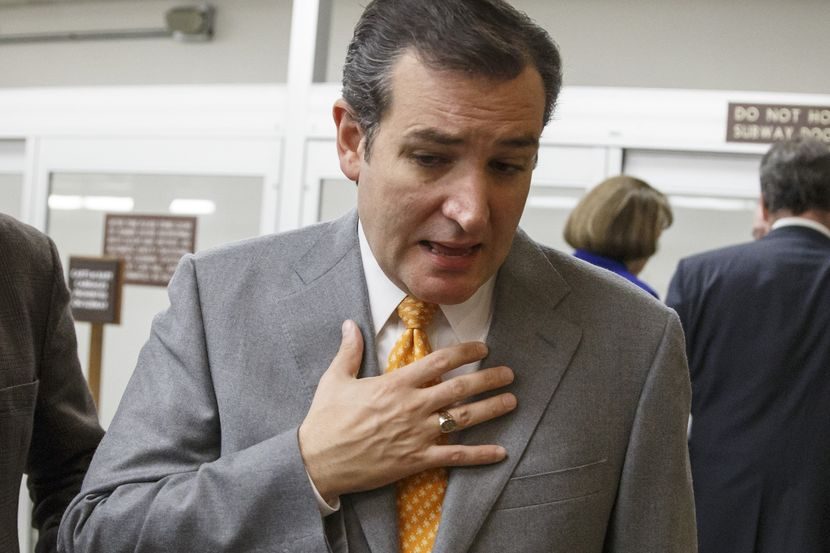 Ted Cruz was shocked when he found out he was a Canadian! Imagine waking up and turning on the morning news and hear them reporting that you have dual citizenship?  Well, that is exactly what happened to poor Ted the day he found out. (see link below).
“Now the Dallas Morning News says that I may technically have dual citizenship,” Cruz said in a statement published by the Washington Post. “Assuming that is true, then sure, I will renounce any Canadian citizenship. Nothing against Canada, but I’m an American by birth and as a U.S. senator; I believe I should be only an American.”
If you believe that Ted did not know he was a Canadian citizen until he heard about it on the Dallas morning news in August of 2013….then you deserve to believe all the rest of the stuff he tells you. If you won’t question this – why question anything?
Ted’s office didn’t know this either. They claimed to be unaware that the Texas Republican is technically still a Canadian citizen. “Senator Cruz became a U.S. citizen at birth, and he never had to go through a naturalization process after birth to become a U.S. citizen,” spokeswoman Catherine Frazier told the Morning News. “To our knowledge, he never had Canadian citizenship, so there is nothing to renounce.”  Imagine their surprise – they didn’t know either!
Now as soon as this came to the media attention, and it didn’t go away, he followed through and denounced his Canadian birthright.  He somehow managed to find his unknown birth certificate and went through the steps to denounce that unknown Canadian citizenship.  He showed the Canadian birth certificate and official denouncement paper to all of us and declared he was now a US citizen.  Wow if only it were that easy for every immigrant?
Yet there are still a lot of unanswered questions about his eligibility requirements to run for president. Questions that just aren’t going away as easy as his Canadian citizenship. But, fear not, Cruz said his mother told him that he could claim his citizenship if he ever wanted to, but that he never pursued it and thought the matter was settled. (see link below)
Does he expect us to really believe it took the Dallas morning  news to help him decide to pursue his American citizenship that he loves so much and stands by  for all of us?  That he has worked on immigration and policy for the Bush campaign, became senator of Texas, expressed his desire to run for president  and never thought about pursuing his American citizenship first?  Or is he telling us the proper paper work was never completed and his mother told him he could always claim (pursue) it later?  Or was it simply a matter of don’t ask, don’t tell?
Read More Here: https://www.washingtonpost.com/news/post-politics/wp/2013/08/19/cruz-will-renounce-canadian-citizenship/
And here: https://slate.com/news-and-politics/2013/08/ted-cruz-canada-calgary-born-texas-republican-has-dual-us-canadian-citizenship.html
Can you imagine? Then there is another issue. Liberal Democrat Grayson is threatening to sue Cruz over his eligibility if he wins the nomination. Trump warned something like that could tie him up for two years.
That’s when the Cruz fans yelled and screamed like it’s Trump’s fault Cruz has this mixed up traveling show of a birth right. Yet, once again, Trump had the best advice. He tweeted Ted the following message:
“Ted–free legal advice on how to pre-empt the Dems on citizen issue. Go to court now & seek Declaratory Judgment–you will win!”

So time will tell what happens with this eligibility issue. It is what it is. The question is will they let Cruz slide?
Dianne Marshall
https://hotair.com/allahpundit/2016/01/07/mccain-knifes-cruz-um-i-dont-know-if-hes-a-natural-born-citizen-of-the-u-s-n229946