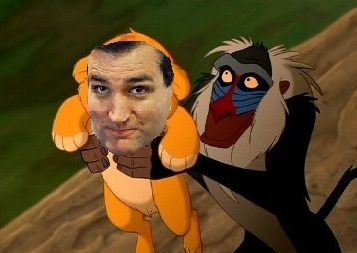 Ted, do you not realize that millions of Iowans never get a chance to vote because the caucus facility assigned to their district has a limited seating and standing room capacity? I personally think that sucks. and they should all who show up be allowed to go in and vote.  But when they reach their  FIRE MARSHALL capacity…the door is shut.
So Ted Cruz did a major double fail….his stupid NSA data mining “voter shame” mailing was a major fail, did it tell him which Iowa citizens got out to vote and they couldn’t go in?  Did that give them an “E” for effort or did they still have to accept the “F” along with their neighbors who may or may not have been allowed in?  This just goes to show the idiots at the Cruz campaign that without the right data in- you get garbage out.
So, will somebody start a big class action lawsuit now?  That was against Iowa voter ethics and for a big reason.
Cruz is proving to be a very unintelligent lawyer.  And I am seeing he is in the shallow end of the pool as a senator too!
Dianne Marshall
Learn how to caucus…..https://themarshallreport.wordpress.com/2016/01/31/lessons-for-an-iowa-landslide-advice-for-hard-core-donald-trump-iowa-caucus-goers-lesson-1-using-long-lines-as-a-weapon/