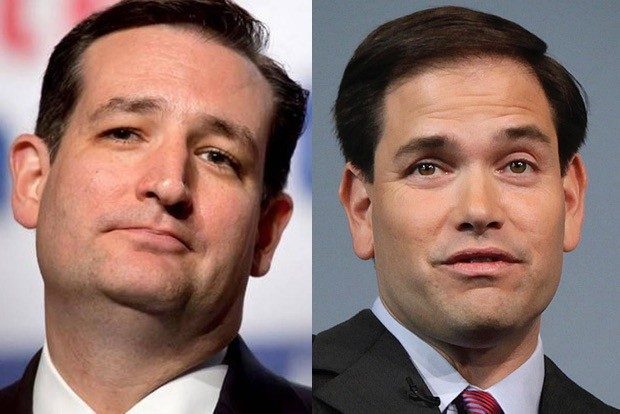 Funny isn’t it how Cruz and Rubio have so much in common.
Both have Cuban Fathers, both have ineligibility issues, both new in the senate, both miss important votes, both lie about why they voted for and or against bills, both have same donors, both have same foreign policy advisors, both have Goldman Sachs pushing them, both benefit from voter fraud committed by both Rubio and Cruz camps. Both mysteriously surged in polls, both really want a borderless America…after all they are pushing establishment goals for North American Union and both deny they do at the same time.
Let’s face it the establishment, the media, the pundits, and their donors know that both shouldn’t be running at all because neither one are natural born citizens. But, then again, that is exactly why they want them.  They need a puppet to push their North American Union Goals that need sped up.  That is what they decided at the last Council on Foreign Relations meeting in 2015…remember?
Organizing the U.S. Federal Government to Shape a North American Policy
“To change the U.S. outlook toward its home continent, North America needs to receive continuous, not episodic, attention. The Task Force recommends designating a senior U.S. official as the North American “champion” who will press for consistent policies across agencies and topics. Given the power relations within the U.S. government,this person would need to be the vice president, secretary of state, secretary of the treasury, or perhaps the national security adviser. The individual’s interest in the role is more important than his or her bureaucratic base. The assignment would need to be backed by presidential support, including through the White House and National Security Council.”
Cruz The King of Gaslighting and North American Union – If not him, CFR will find another.
So….there it is in a nut shell.  It is the people verses the establishment just like Trump supporters have been saying all along.
Dianne Marshall