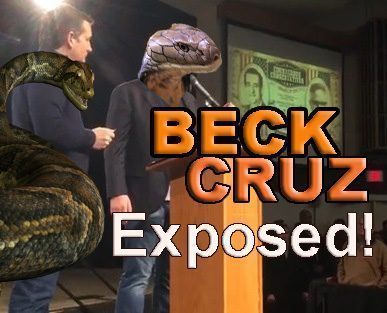 “From the beginning of this campaign, we’ve taken the high road,” Cruz told reporters.
I say if that is his high road, I don’t even dare to ask what the low road is. In fact, there is no lower road to take unless you are riding into hell itself.
The Cruz ticket high road has been one leading to oust Carson from his own votes in the Iowa Caucus while calling CNN the liar, shaming voters with illegal mail, lie after lie about things Trump never said or did even calling him Hitler and his supporters Nazis, lying that Trey Gowdy is now endorsing Cruz and dissing Rubio, social media data mining without individuals permission, robo calls smearing the other candidates, mailing out fake checks ….oh the list goes on and on. We even saw Beck swearing in Cruz for the presidential office!
Now Beck is condemning all evangelicals for the sins of those who did not vote for Cruz and swearing off the use of that name forever – wonder how many who were a Beck follower found that offensive? Did he even stop to think there are still 47 states that haven’t voted that are yet full of evangelicals? Too late now…. their temper tantrums never think past the “Do what I say right now or die America” moment.
I swear if they had grenades they would throw them.
So when the heat is on and Cruz’s chubby vote grabbing hand is stuck in the cookie jar before the South Carolina primary…what does he do? He calls a press conference to proudly announce he is the frontrunner citing a skewed poll and blames Rubio and Trump who supposedly are jealous of the almighty Rafael Edwardo Cruz.
“It’s been six, seven months since anybody has been first nationally other than Donald,” Cruz said. “The reason for that sea change is as we get closer to Election Day — look, everyone gets why someone would support Trump. You’re ticked off at Washington. Washington’s corrupt, and Trump feels like a way to tell Washington, ‘Go jump in a lake.’ I get that. That makes sense to me. But as voters get closer to Election Day and start looking at the records of candidates, you start examining them more closely, and I think two things are driving this: No. 1, the Supreme Court and then I think the second thing that is driving this is who’s prepared to be commander in chief.”

Really Rafael? Why didn’t you mention that while one poll had you leading by a point, other polls still had Trump way ahead? Not to mention that polls in South Carolina always had Trump leading you by a lot and at that very moment you were at a very distant second or third to Trump?   But, why let facts interfere with your idea of the “high road”.
Read what the Texas Tribune says about Cruz’s high road press conference here: https://www.texastribune.org/2016/02/18/sc-cruz-fights-stay-above-fray-race-turns-nasty/
High road Cruz apologizes to New Yorkers – NOT.  What can I say but, he is just a jerk with the pedal to the metal on the low road. I told you already where that leads.