Common Core standards were written by five men behind closed doors. They crafted the standards through the Melinda and Bill Gates Foundation. Millions of dollars were given to push Common Core before it was even written. Even Catholic Schools were lobbied to push this in return for cash. These foundations are privately owned and copyrighted. 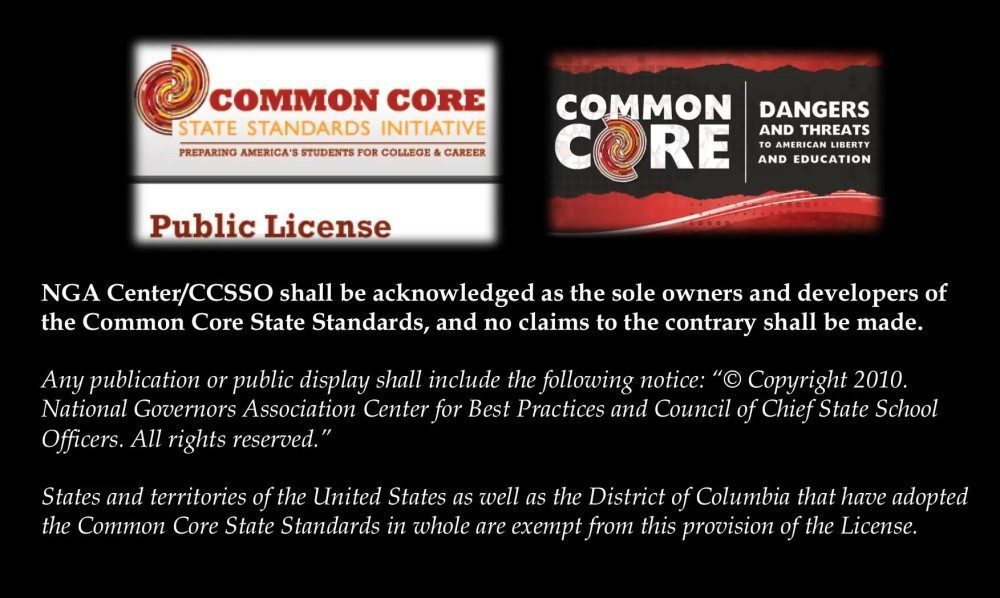 The government has been transforming the way education is done in this nation, through private resources for a long time. Why?   Because, since a 1965 legislative act, the federal government is prohibited from creating school curriculum. So to get around that red tape they hired a private group to write and push a new curriculum. See act here: https://www.govinfo.gov/content/pkg/STATUTE-79/pdf/STATUTE-79-Pg1219.pdf
To get around this act, for example, Race To The Top in 2009 was given billions and billions of tax payer money to the states to push this agenda written by a private source. They did. In the fine print for accepting federal dollars, the states who accepted the federal money were on the hook to have to accept the common core standards once they were written. That is how it slid into the states’ school systems. 46 states were bribed to take on a curriculum they had never seen, Alaska, Nebraska, Virginia and Texas were the only states that did not take the federal money.

In the fine print it was clearly stated that – if a state accepts federal money for Race To The Top, they must adopt Common Core when it is finally written.
https://www.youtube.com/watch?v=vFzy5dL2gGo
So now… how do the states wiggle out of their commitment? Let’s ask Joy Pullman who has exposed Cruz for his deceptive stance on Common Core and Home Schooling that he loves.
Joy writes: The headlines pretty much sum it up: “Ted Cruz Makes Impassioned Plea For Repeal Of Federal Legislation That Does Not Exist” and “Every Claim In This Ted Cruz Statement Is Completely False.”
The second critiques this statement from Cruz’s spokeswoman: “Common Core is a federally created curriculum that the state’s ‘Race to the Top’ grants are tied to. So if the state does not adopt the standards, it gives up the grant money. But since the federal government created this mess, there should be a way to undo it.”
Think Progress Editor in Chief, Judd Legum responds:
Literally every claim in that statement is false.
First, Common Core is not ‘federally created.’ It was created by the states, on a voluntary basis. As NPR reported, ‘the federal government played no role in creating the standards, nor did it require that states adopt them.’
Second, Common Core is not a ‘curriculum.’ Federal law actually prohibits the federal government to ‘to endorse, approve, or sanction any curriculum designed to be used in an elementary school or secondary school. Common Core is a set of math and English guidelines that outline a set of skills one should have at the end of each grade. The curriculum used to obtain those skills is left to school districts, schools and teachers.
Third, ‘Race To The Top’ grants were never tied to the adoption of Common Core.
Joy responds, “Legum might want to spend some time googling up the pertinent federal and other publicly available source documents, because he’s flat-out wrong.”
I say, look at the PDF, provided at the top of this article and you will see that Ted Cruz is wrong and Joy is correct.
This is what we are up against. Those who tell the truth are called the liars and the liars are perceived because of their legislative titles to be the ones telling the truth. Yet it is opposite. To make it even more confusing…sometimes there is a bit of truth with a wrong conclusion.
Below please see Jason Zimba, one of the three drafters of the Common Core math standards. The questioner is Dr. Sandra Stotsky. This exchange took place at a meeting of the Massachusetts Board of Elementary and Secondary Education on March 23, 2010. As you will hear, Dr. Zimba admits not only that the CC math standards aren’t designed to prepare students for STEM (science, technology, engineering, and math) studies, but also that they’re not designed to get a student into any selective college, even in a non-STEM discipline.

The federal government provides at least half the operating funds of the two organizations that created Common Core, which are private nonprofits with no authority to create any binding national initiatives or laws. So either way, the feds were there at the beginning, at the request of Common Core’s creators, no less.
Read the full story here:
https://news.heartland.org/editorial/2015/03/27/ted-cruz-gets-common-core-way-better-thinkprogress-does
Then when something is brought into the light like Common Core science which was so bad, they merely change the name of the thing. In this case, they changed its’ name to “Next Generation” science. Yet, it is the same thing as Common Core science. This is how the secret systems deceive. When something gets exposed…they change the name and tell you it is different.
The bottom line is this…anything that has free federal funding attached to it is not free. There is always a loop hole in the fine print. The federal government funds states to take on the curriculums devised by private funded groups who do the bidding of their agenda. It is a deceptive practice and one most are unaware of. The states who voted for this were either no brighter than those who have been educated by Common Core or they went along with the program for lobbyist perks – perhaps donor funding? It is what it is.


Know the drill and take back your schools. Hopefully, it is not too late? But that would require overturning each states legislative body. A hard task to achieve for as I said, many are bought.
Without Trump, you will not be able to do this for the other candidates are paid and bought by the establishment donors who support the agenda. The same agenda you, the parent, do not want. They are deceptively assuring that all educational systems, even that of home schooling accept federal money. They fail to report the fine print that all who accept federal dollars must abide by. It is what it is.
Dianne Marshall
https://www.heartland.org/joy-pullmann