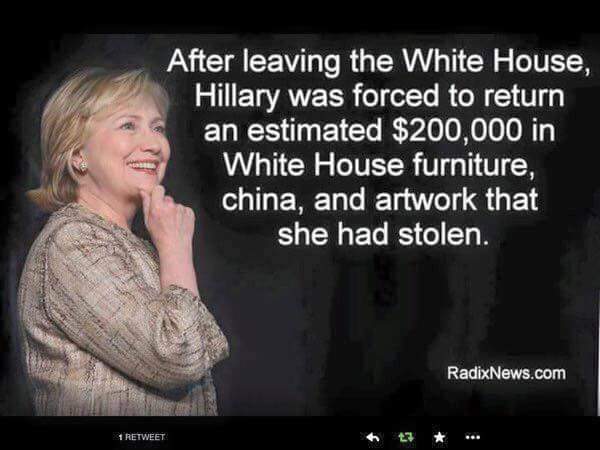 When the Clintons left the Whitehouse, Hillary stole the furniture and other items because she said they were broke?  That goes right along with their redistribution of wealth mindset.  Did anyone even think about her response to the press when asked why she took the stuff and she answered “Because if you recall when we left the Whitehouse we were broke.”?
https://www.youtube.com/watch?v=B6NC25J4vtI
They were broke alright, it’s called morally bankrupt! Nothing has changed they are still broke when it comes to conscience, morals, values, and love for humanity. They have no moral compass, only a goal to fulfill the UN’s goals for the 21st century for a new world order- sustainable development agenda 21!  The Clinton Foundation is a foundation to fund agenda 21 new world order sustainable development and progressively advance the world redistribution of wealth through theft and deceit!
Dianne