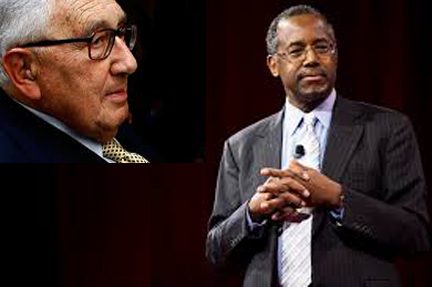 In a Mike Wallace interview today, Ben Carson told him he is informed on foreign affairs after speaking with many people, the one he mentioned by name was none other than Henry Kissinger.

Well does that make you feel confident people?  Does it?  The one man he used as a key source is none other than the New World Order King Developer and Bilderberg mastermind, Henry Kissinger.

If that doesn’t tell you who his puppet master web involves….nothing will.

Kissinger was definitely sizing him up and measuring the puppet strings.  Did he make the cut or not?  I think he has the mind they are after.  Full of grandiose ideas and not an ounce of truth inside.  Complete with built in mechanisms to shout you didn’t understand what I meant.  A real made to order puppet.  Just give Carson some gold and he will gladly say you never endorsed him….just like Mannatech.  Redemption lovers will wholeheartedly believe Carson just like they did Obama.   Sadly, no one learns their lessons in redemption land.